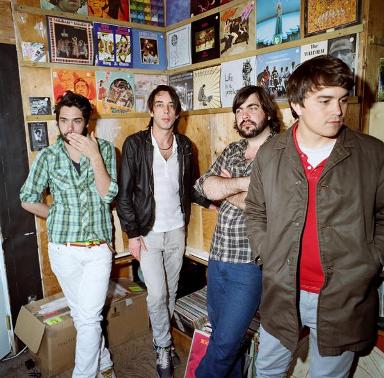 The process of describing an album can be difficult. It’s often months and months of blood, sweat, and tears intricately pieced together note by note. Yet, many want the whole vibe of the album in a sentence or two, like some backwards high school English assignment. However, the boys of Wolf Parade have done a pretty decent job of describing their new, as-yet-unnamed LP in a rather precise manner.

“This is not a fussed-over computer record,” says one of the band’s primary soingwriters, Dan Boeckner, in a recent interview with Exclaim! “There’s almost zero overdubs on the record. So what you’re hearing is pretty much what it sounds like live.”

The album, the band’s third, is just getting into the mixing stages after being recorded at Hotel2Tango with producer Howard Bilerman, who has worked with the band before and also was the man behind the boards for Arcade Fire’s Funeral . As for the reason for the missing overdubs, Boeckner cites keyboardist/multi-instrumentalist Hadji Bakara heading off to to study English literature at the University of Chicago. Despite being one man down, the band is making up for it by working hard to play new instruments.

“There are a few songs that are really, really intensely keyboard-heavy, but not like Depeche Mode. On the other hand, there’s also a lot of guitar solos — proper solos,” Boeckner said. “Some of the stuff is really, really heavy, ’80s-coke rock.”

And despite the line-up change, the band is still going just as hard to get this album onto shelves, even going so far as to track everything in just two weeks.

“Everyone’s been working on it for 12 hours a day, seven days a week for the last two weeks,” Boeckner said. “We ended up recording, I think, 15 songs, over 80 minutes of music, and we don’t really know now whether we’re going to put out an LP or a double album. If we did an LP maybe we’d do an LP and an EP, because we want to put all of the songs out. There were no songs that we recorded where everyone was like, ‘Oh, that’s a dud.'”

While there’s nothing official in the way of a track to feed to audiences, Boeckner does have a few songs he said he could easily see as singles.

“(“Caveosapian” is) kind of an uptempo rager that Spencer sings that you could imagine people doing—you know the Archie Comics, when people are dancing?,” Boeckner said. “That kind of dance.”

Of course, there’s also “Yulia”, which stems from Boeckner’s rather obscure obsession.

“I kind of get obsessed with cosmonauts, and specifically lost cosmonauts—cosmonauts that are still dead and floating in space,” Boeckner said. “So the song is kind of a love letter to a cosmonaut’s life. I’m pretty happy with that. It’s got a bit of a Righteous Brothers feel to it.”

Check back for more details on the tracklist and album title as they become available. You can check out the band on tour in Canada and Europe, undoubtedly with the new material ready to go, starting April 1st. The album’s scheduled to hit stores June 29th via Sub Pop.