Coheed and Cambria – Year Of The Black Rainbow 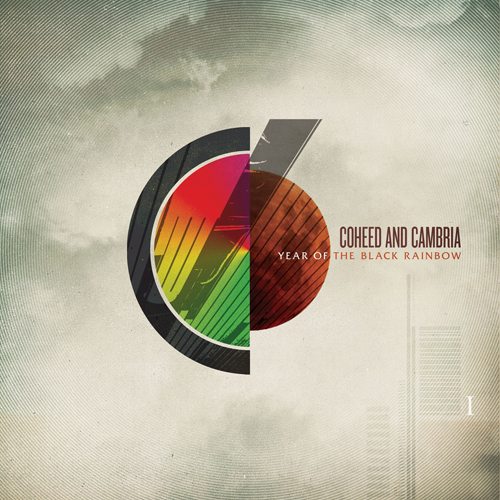 There are three kinds of people in this world, according to music fans: those who casually enjoy Coheed and Cambria‘s singles and albums, those who are die-hard that dig into the detailed mythos around which this band’s music is centered, and those who couldn’t care less on all counts. Whether you think Coheed and Cambria sold out post-Second Stage, or you fainted from the news that Year Of The Black Rainbow would be packaged with a written piece relating to the aforementioned storyline, some of us only care about one thing. Will Year Of The Black Rainbow hold up to other catalog inclusions as both standalone and companion?

Coheed and Cambria’s lead vocalist and lyricist Claudio Sanchez has crafted a very unique universe that the majority of his band’s music has narrated, albeit rather cryptically if you are a newcomer. While you need not fully grasp this tale to enjoy the albums musically or relate to some of the references, more in-depth followers track their Star Wars-like continuity (minus Western film allegories and bad CGI retcons) with a fervor inversely proportional to the mass hatred of Jar-Jar. For those who have kept tabs on Sanchez’s epic tale, I am positive you will enjoy Year Of The Black Rainbow for what I can only assume is a dedicated effort in faithfulness to source material.  Why else would specially-packaged editions sport a fucking novel to flesh it all out? Not a comic, but an absolute book? Who says print is dead?

On the other weaponized hand, we have Black Rainbow via CD/MP3/V-Chip medium, bought and sold or downloaded as such.  From start to finish, this album sonically resembles the Michael Bay of Coheed and Cambria material — all flash, no substance. Given the lengths at which Coheed and Cambria impresses people through stellar guitar work and vocal presence, not to mention the concept strung throughout every release and the sheer capacity of Neverender, I do not know what I was expecting from Black Rainbow; what I did not expect was an album with enough synth and background noise to rival a Linkin Park/Transformers exclusive single, let alone how preposterously boring it all felt.  The bombast of songs such as “Here We Are Juggernaut” and “In The Flame Of Error” play out like empty and physics-defying explosions from a long-dead robot, “The Broken” and “Far” (probably the two best songs here) come off as excuses for which to wrap the record around.

Black Rainbow is what happens when casual fans prop up “Welcome Home” to Rock Band 2 status. The mesmerizing chaos embodying “Delirium Trigger” or the charm of MTV staple “A Favor House Atlantic” are stripped away in favor of melodies appropriate to soundtrack an action movie.  Perhaps that was the goal, to make something more accessible, and that very well could be the case; unfortunately as a result, Coheed and Cambria’s latest fare feels less passionate and more publicity-driven.  In some cases, songs like “Guns Of Summer” and “World Of Lines” seem to have cribbed some Mars Volta vibes and twisted them to suit the needs of Sanchez’s front-and-center position. Someone getting a “Diet Rodriguez-Lopez” impression here besides me? Just one calorie, not enough Lopez.

I admit to being a fresh fan in the Coheed camp so I cannot elaborate on how deep Black Rainbow‘s prequel storyline truly goes, or if I am overlooking some grand art embedded in crafty lyrical symbolism. Truth be told, what captured my attention with Coheed was the live show, and though listening to other albums live sounded phenomenally better than the albums, Black Rainbow comes across like a band who would simply do a dead-on imitation of said work without any added flare. No one is asking for a jam set, that is what stuff like Grateful Dead or Dave Matthews Band was made for — but the charm of a live set is to add more spike to the punch, whereas this record is only overblown punch for the popcorn bowl and an “up close and personal” interpretation would only amplify the faults underlying the shell of oomph Coheed And Cambria tried to hype up.  There are good songs, such as “Far”, video-accompanied “The Broken”, and “When Skeletons Live”, but they are overshadowed by things that should not be.

This is a good idea that got a bad pedestal, sadly. Most will probably enjoy it like they enjoy Ah-nold movies, it will be catchy and sell a lot of copies. If it rounds out its respective storyline to those who bought the book/album combo, then more power to you all; meanwhile, I’d rather just watch Neverender again, or at the very least recommend Octahedron instead.