Elliott Smith – From A Basement On The Hill [Reissue] 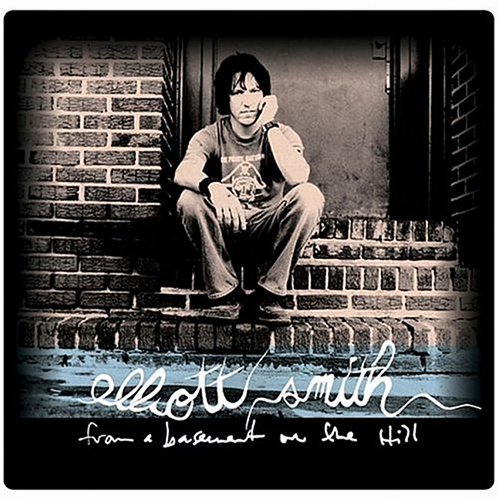 Let’s cut the sheer eulogy crap this album has had to deal with when having been written about and get to the point. It’s quite logical that Elliott Smith‘s first and last albums are being re-released. They nicely frame his discography, Roman Candle being the first trembling steps of what would to be a striking row of albums and the post-humously released From A Basement On The Hill being a collection of fragments and shards of not just the incomplete recording sessions but also Smith’s emotional rollercoaster ride of the last years of his life.

Smith had started working with a more abrasive rock sound, reminiscent of his Heatmiser years ,as can be heard on songs like “Coast To Coast” and “Don’t Go Down”. His intentions had at first been to release a double record, which is why he takes the liberty of being so refreshingly varied and all-over-the-place. For a Smith fan it’s fun to hear Smith be so creative with his dark themes even though this probably is considered by many to be their less favourite album by him. Some fans may oppose to Smith’s former girlfriend and Heatmiser manager Joanna Bolme being brought in to finish the remainder of the production together with longtime Smith collaborator Rob Schnapf, and rightfully so.

Elliott Smith is sacred territory and to complete an album for him, even if it was only a matter of mixing it as Schnapf has claimed, seems like taking a little too much liberty with the work of an artist with as much integrity who had always had almost complete control of his recordings and tendency to make songs out of the darkest personal issues.

Perhaps it’s a harsh zero tolerance statement but personally I’d rather have had the raw, completely untouched recordings released. Or at least the chance to retrieve and hear these somehow too, perhaps as a deluxe two disc edition for the fans? This isn’t just petty criticism from a finicky music writer and avid fan of Elliott Smith, many fans do have a strained and uneasy relationship to this album. One thing is for sure, however, besides all uncertainty of the authenticity of this legacy, From A Basement On The Hill is almost as good as any of Smith’s albums. The half-baked arrangements are raw, the songs are irreproachable raw material and this remastered reissue makes it sound like you’re having this chaotic basement in the middle of recording sessions somewhere between your ears.