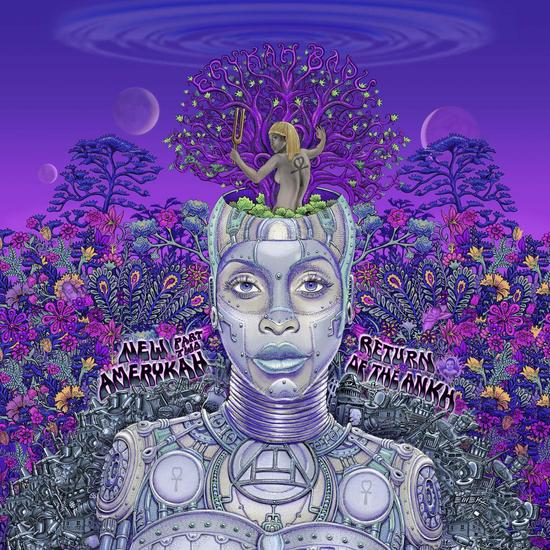 In an interview with Rolling Stone, Erykah Badu describes her latest album as “more emotional and flowy and talks about feelings.” Unfortunately, Badu is spot on. New Amerykah Part Two (Return of the Ankh) is sappy, dramatic, poetic, and couldn’t be farther from Part One. Think of listening to Baduizm on Valentine’s Day after a Sex in the City marathon. The abandonment of all things political and intellectual could be viewed as a huge disappointment, especially to her male audience that flocks to all things hip-hop. Yet in between the words “Love” and “Baby” hides something that grooves and shakes just like an Erykah Badu album should. It all truly depends on one’s preferred listening — revolutionary lyricism or drawn out ballads.

If you’ve read the news lately, Badu has gone to great lengths in promoting “Window Seat”, the lead single from New Ameryka Part Two. Delta Airlines has already signed a contract to use the song as boarding music for every flight (ha), and describing her music video as provocative would be an understatement. The exposure has been rightfully so, as “Window Seat” embodies exactly what this album should have been. Badu’s signature nasal voice never ceases to seduce while paired with a riveting bass line throughout catchy refrains.

After that, the rest of New Ameryka loses the magic it never really had. Track by track, it morphs into an R&B album before the listener can get the chance to absorb that nu-funk vibe, thought to be promised by a “Neo Soul” artist. As the album develops, the ease and relaxation in both instrumentation and voice becomes more tedious than experimental. On “Incense”, a captivating harp continues with little variation, and “Out My Mind, Just In Time” attempts longevity but achieves tedium with ten minutes of piano-laced shrills. Repetitive qualities are suiting for a hip-hop record, but when Badu attempts R&B with continuous looping, it’s hard to stay focused.

When lyrics are sprinkled on that lack the profound nature of her previous albums, only the music can save a conservative project. Yes, “Fall in Love (Your Funeral)” has a beat that makes your teeth clench in the best of ways, but the song ends the same way it began. Singing “You don’t want to fall in love with me” from start to finish simply overshadows any intrinsic value. Not even her publicity stunts can make up for a record that has as much shock appeal as Eminem’s Relapse. There’s nothing wrong with Badu getting in touch with her feminine side — it’s just hard to watch a woman seemingly go back in time to naive beginnings after releasing such heavy material.

The element of Part Two that does do “Baduizm” justice is the obvious production value. Recorded at Electric Lady Studios, the entire project reeks of intent; Badu achieved exactly what she strived for. The experiences shared are deeply personal (relationships, breakups, etc.) , which in turn makes for an impersonal experience from the casual audience. What remains unclear is whether Badu’s motives for this second installment is at the benefit of the public or her own introspection — an artist making music for herself is actually quite refreshing. No matter the cause, all we can do is listen and hope to catch some good tracks along the way.