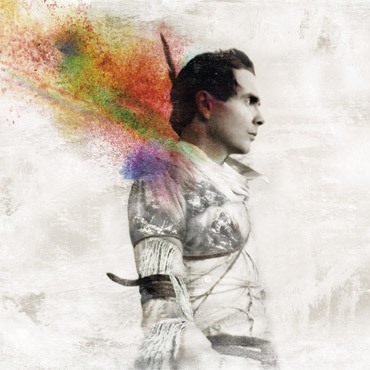 Ever since Icelandic post-rockers Sigur Rós made a name for themselves with their sophomore release, ÃgÃ¦tis byrjun, adjectives such as epic, majestic, ethereal, and atmospheric have peppered the reviews of each subsequent album. On 2005’s Takk…the band didn’t stray too far from its brooding roots, but for the first time you could hear an optimistic quality to the music. Once music advisers got wind of the album, specifically the track “HoppÃ­polla”, Sigur Rós became the soundtrack to scenes of hope and revelation on TV and in film. Not content to just dabble in the lighter side of things, the next album had moments of full-fledged euphoria. “Gobbledigook”, with its tribal drums and furious acoustic guitar, sounded unlike anything the band had previously released. The entire LP had an energy that suggested the band had been bottling its happiness for the last decade.

Now, frontman Jónsi’s solo debut continues the evolution of sound and makes a good case that he is responsible for the band’s sunnier sound. Go is every bit as pulsing and forward-looking as the title suggests. Even the cover art portrays a grayscale, fabric-bound Jónsi looking askew while a burst of chalk pastel bounces off of his back. The entire project is kinetic.

“Go Do”, the lead single and album opener, opens with fluttering samples of Jónsi’s vocals and a rising flutes that are overtaken by marching percussion. Although he often sings in English on the album, his falsetto makes it difficult to decipher what he’s saying. Still, the uplifting momentum of the song isn’t affected in the least. Perhaps years of listening to Sigur Rós sing in Icelandic and gibberish trained their listeners to take the music in as an experience bigger than just the lyrics. However, Jónsi’s clearer vocals on the industrial-folk tune “Animal Arithmetic” allow us to have a solid anchor in a song that swirls with ambient sounds and studio instruments. His ability to make the music frantic and playful but ground it with lyrics about fireworks, trees, and breezes connects keeps the album from floating into an abstract mess.

Tracks like “Tornado” and “Sinking Friendships” are strikingly similar to Sigur Rós’ output over the past two albums, but he reminds you that this is his LP. Where the band’s songs would explode into hellish drumming and stretch into double-digit running times, he keeps the dramatic flourishes to a minimum and most songs under five minutes. He also toys around with the studio tools, scrambling his voice and added glitches that disrupt the smooth production. One of the few times he does tease you with a Takk…-like finale is “Boy Lilikoi”, which spends the last minute in escalating rhythm. However, Jónsi’s voice, harmonizing with itself, is the focal point at all times.

I linger on the euphoria presented in this release because it is at times so opposed to the image Jónsi spent five albums creating. Gone is the image of the lanky front man hunched over his electric guitar as he dragged a bow across it or held it up to his mouth in order to howl into its belly. The focus of this release is outward in every way imaginable. Even “Hengilas”, which solemnly closes the album with droning strings and horns, has enough choral vocals to fill a church. A hip church that welcomes post-rock and face paint, that is.

Jónsi has a unique voice—not just for rock music but for most any genre. Like his fellow Icelander BjÃ¶rk, anything he sings on has his unmistakable stamp on it. (Look no further than last year’s collaboration with TiÃ«sto for proof.) Even the most casual Sigur Rós fan will recognize him four measures into the first track. Yet, he pulls off the difficult task of making a worthwhile solo record. As much as this sound began with the band, it veers into a direction suited for his vocals and ambition, not for a full band’s. What’s more, the songs are excellent. They cut to the point. These songs aren’t meditations for you to unpack; they are flashing experiences to be appreciated before they disappear in a few minutes. Go works as a standalone project for new listeners and it works as a contrast for longtime fans. And for both audiences, it works unexpectedly well.