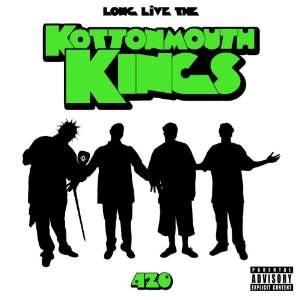 Okay. I’m not sure how to write this review and not seem like a total close-minded asshole. Maybe I’m being too hard on myself. Maybe this won’t come off as totally one-sided and angry and cynical, but I doubt it. I don’t know if this review will set off a flame war of epic proportions in the comments section, but it might. I know that the Kottonmouth Kings have a pretty big fan base (somehow)—what with their connection to Insane Clown Posse and their Juggalo army. But how many of those fans read this website? That I don’t know. Regardless of that, this album is just awful. I have tried hard to find some highlights to the album, but I just can’t wrap my mind around it. Not that it’s so obscure and weird that I can’t understand it. Far from it. It’s more that I can’t understand how a band like this has lasted as long as they have making songs about one topic. Just one: smoking pot.

Kottonmouth Kings have produced 24 albums, live recordings, EPs, compilations, and remix albums (not to mention numerous films that they are involved with in some way) all about smoking pot and the craaaazy hijinks that come from the past time. I suppose one thing to praise is being able to get not only the 20 tracks of the new album Long Live the Kings (released on April 20th…4/20…get it?) out of the concept, but also those 24 albums over 12 years. 24 releases. One topic. That’s where the half star I gave comes in.

To be fair, there are other topics investigated on Long Live the Kings other than pot. There is the club banger “Mushrooms” which is about…mushrooms, “Fuck the Police” which features Insane Clown Posse and is about the protagonists being pulled over for…smoking pot while driving, their serious, slow-jam “Kill the Pain” about just getting through life, “Stomp” whose chorus is “Stomp on them bugs/Stomp on ‘em”…I don’t get it either, and “Black Smoke” which is about some mysterious black smoke that is taking over everything (which I hope is some way tied to the Dark Carnival that ICP raps about, or maybe Lost). So I guess, as you can see, my blanketed statement about everything being about pot was wrong. Sorry Kottonmouth Kings. I won’t generalize from here on.

So let’s get past the terrible idea and philosophy that is the band and get to the music itself because after all that’s what you want to hear about. The album has three different flows on it basically. One is a quick sort of Eminem-type pacing with quick syllables and fast delivery, as heard on member Dirt Ball’s verse for “Long Live the Kings”, “Rampage”, and “Great When You’re High”. Then there’s another flow that seems to be more on the mainstream level. This more or less matches word and beat one for one, which is quite prevalent on the album’s titular track. This melody is repeated in “Let’s Do Drugs” and “Let the Indo Blow”, making it the predominant flow on the album. The final one is the standard rap singing flow that you can hear on “Kill the Pain” and “Simple and Free”.

Now I know that most rappers have a standard flow. You can tell a Ludacris or Mystikal song from a mile away usually, but the difference is lyrical content and they know how to switch it up when needed. Also their flow is typically different and interesting. The Kottonmouth Kings make it boring. Incredibly boring. It’s all the same things song-to-song. Even the beats all sound incredibly similar, save for the slower tracks. To top it all off, every track is slickly produced and clean.

And speaking of the lyrics, master poets the Kings are not. Again, while I commend them on finding every possible word for pot and then rhyming things with it, it still makes for boring songwriting. Some of my favorite lyrical gems that stuck out on the album were:

“I love Obama. I love all people. I just can’t believe the plant’s not legal” – from “Reefer Madness”

“Doin’ drugs by yourself is fun/but doin’ drugs with friends is better” – from “Let’s Do Drugs”, which also includes a poorly placed clip of cheering kids in the chorus right after this line.

They aren’t exactly Talib Kweli or Mos Def or Maya Angelou or anything, but then again they have a limited vocabulary base. Not that they are unintelligent, but that there are only so many euphemisms you can use for doing drugs, so they limit themselves. Maybe for their next album the Kottonmouth Kings could try rapping about other things. Maybe they could just pick something from the list of random crap that ICP talks about in their “Miracles” video? Rainbows? The Kings could get high and rap about why magnets work?

But then again, if they rap about something else, what will happen? The seas might shift, the sky might turn dark and ominous, animals may start fighting back against humans! Dogs and cats… living together… mass hysteria! Rappin’ about pot is what the Kottonmouth Kings do. It’s their shtick. Kanye West has crazy super ego rants, Jay-Z has money and the Marcy Projects, Ludacris has Atlanta, and the Kings have pot. And while I wish this review could dissuade anyone and everyone from going to buy this album and assaulting their brains with this mindless drivel, I know the album will probably sell thousands of copies. Their fan base is deep and strong (somehow) and they come out in droves. Why do you think ICP’s Gathering of the Juggalos is always well attended? Rabid, die-hard fan base. You gotta give them credit for that at least—if for nothing else.