LCD Soundsystem – This Is Happening 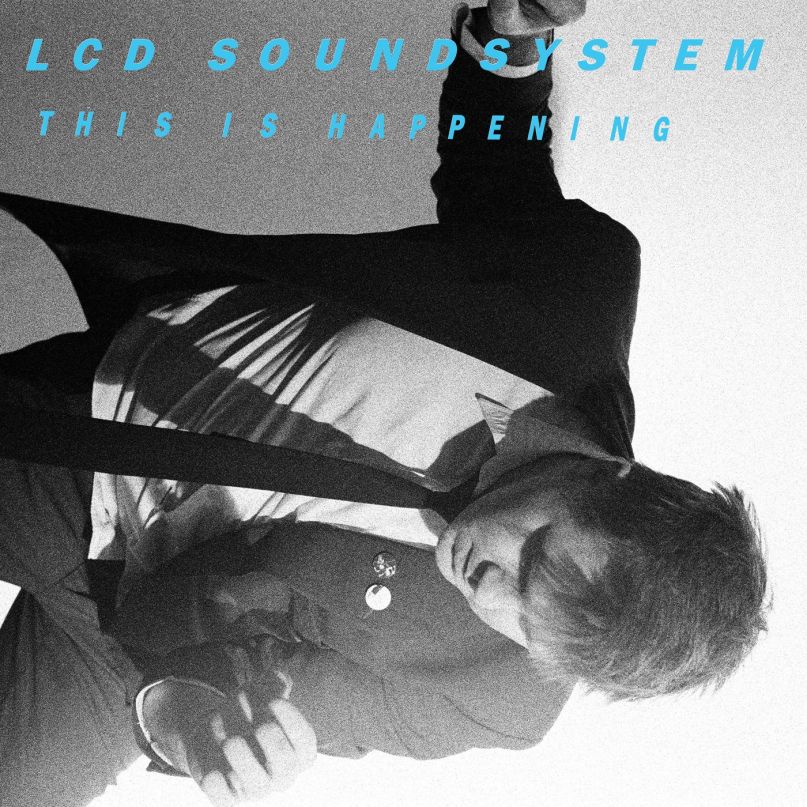 There are many ways to release an album. Radiohead let you choose what you pay, Guns N’ Roses made you wait more than a decade, Pavement held a contest to choose the track listing. And just think how much the internet has changed things? Remember getting a blank cassette and listening to the radio until the song you like played and then pressing record? Two of this year’s most anticipated release shows two very opposite sides of the musical spectrum in pretty much every way except one, quality. When Joanna Newsom was ready to release Have One On Me, we had a little over a month’s notice.  There were whispers, a spare show here and there, a cryptic cartoon and then suddenly, triple album. No publicity really necessary (she still hasn’t made it to Southern California).

James Murphy, seemingly the hardest working man in the music industry, went the opposite route. Via Facebook, we have received updates about the album through the entire process, naming, release and tour. Upon finally hearing This Is Happening, it is hard to hold back the feeling of personal attachment, like you were somehow involved in this record, even though you really just watched someone else do it. Both of these records are filled with songs that will not find homes on the radio due to their length, Newsom just wrote twice as many while masking her wit in her eloquence, while Murphy has done the opposite. But this isn’t about more than one way to skin a cat, this is about the artistic process, how people feel the need to share the art and how that makes you react. And how when you have the songs, you don’t care how the hell you got them.

Come year end, you will probably be sick of hearing about James Murphy. The co-founder of one of music’s most influential labels has so far produced one of the better albums of the year (Free Energy’s Stuck on Nothing), scored a film (Greenberg), and now released This Is Happening. Add to that a supposed epic live show that I have yet to see, a rad music video, and… well, you get the picture. The only thing preventing LCD Soundsystem from enjoying the same amount of success in the pop-eye that they have in Europe is, well, James Murphy doesn’t really seem to want it. In “You Wanted A Hit”, Murphy seems to explicitly state that if the non-specific “they” want a hit single, this is what they are going to get (e.g. a song with a killer melody, a two-and-a-half minute intro, and a big middle finger to the record industry). And in case you think it’s an act, he states “You wanted the truth, and then you say you want proof, I guess you’re used to liars saying what they want.” I think we better not question the guy, yeah?

But the rub is this, he has the mastery of pop music that is held by a precious few and usually used for pure evil. Sure LCD Soundsystem songs are fun, but they also make you question why they are fun, whether they are actually fun, what fun means, whether we can ever answer these questions, and whether when all is done, are you happy with what you’re doing (to quote Jason Lytle). It’s meta-party music. Or at least it was, because it wouldn’t really make sense to assume LCD Soundsytem is going to be the same from album to album, and indeed where the self-titled record introduced us to his dance beats that weren’t the most danceable and Sound of Silver upped the bet to include two profoundly affecting numbers, one of which might be the best song ever written (and I mean that), This Is Happening continues the growth to present the hard truths in life.  Where “Someone Great” and “All My Friends” are complete successes, the subject matter is well-worn. Songs about losing a loved one and missing your friends, well, it’s also hard not to hit a nerve.

This Is Happening touches on things we don’t like to admit to ourselves, much less to the listening public. “I Can Change”, maybe the album’s finest song, presents its thesis matter of fact-ly, that we don’t want our loved one to change, but will try to change to make someone fall in love. Who hasn’t felt like this? So into somebody that they are willing to compromise who they are, even though in private conversation, the idea of changing for a lover is scoffed at. Murphy shows more vocal range here than ever before and the song is balanced with the right blend of sonic strange space and good old fashion emotion. “Drunk Girls”, one of the most heatedly debated songs in recent memory, can be heard as a party anthem celebrating and mocking the hedonistic indulgences of our youth, or maybe it is a real inquiry as to why we behave this way and why we lie to ourselves and say it is ok or natural or part of growing old. Murphy is never one to cast a stone, hell he’ll admit he does the same thing. One listen to “Pow Pow Pow” should make it clear that different ways of living have their own merits in his eyes, just as long as they are not full of self-deception. All he asks is for spades to be called spades. Don’t pretend it’s not happening when it’s as plain as day that it is, well, happening.

I can’t fit this into the review while in-stride, but it should be noted how funny this album is. The line “Your time will come, but tonight is our night…so give us all your drugs” makes me audibly giggle on every listen.

Anyway, you see what I’m getting at here? Could This Is Happening be a concept album? The double meanings abound, including the title that could be describing a kickin’ party or the current state of our souls. Album opener “Dance Yourself Clean” is a near apology, letting the faithful listeners know that people always want words from him, but the words that are contained are not meant for us. The unreliable narrator is set and Murphy is free to teach his lessons without fear of rebuke. Because when someone says “present company excluded,” we know that it really means “I forgot you were here.” Or maybe he is just saying party ’til you feel better? There are advantages to both.

So while the dance music playing could free you from the lies you tell yourself, wipe the slate clean, and leave you embracing your decisions for better or worse, Murphy isn’t just throwing that out there without reason. The texturally rich and always unexpected electronic beats, most notably “Dance Yourself Clean”, “One Touch” and album closer “Home” (a partial “Dance Yourself Clean Reprise”)  aren’t quite dance floor ready (there are some DJs on that project as we speak), but they sound great while driving fast on a weekend night, or even driving to work on a Tuesday morning. Some songs can put you in a good mood no matter how introspective. “Somebody’s Calling Me” is the only below par song in the collection and that’s because he sings about his girl texting him.  (I still think it should all be referred to as telephone calls when lyrics are concerned. Think about how lame songs sound that give shouts to paging?)

Murphy’s ultimate conclusion in “Home” is that people fear what they need and that really we are surrounded by potential friends, lovers, and strangers who can relate to us in some way. Or as he concludes in “Dance Yourself Clean”, “We have to try a little harder”, the same phrase Craig Finn sings in The Hold Steady’s “Two Handed Handshake”, a track that is quite similar in theme as “Drunk Girls”. And if you seriously think for a second that all of a sudden, in 2010, the moral compass and protectors of our youth are James Murphy and Craig Finn, well, that’s pretty fucked up. But who better to sing for the children but the ones who at least still remember, who don’t ask to do as they say, but rather ask to just do something, think, and know that life is happening now.

And just steal the damn album like the rest of us…

Essential Tracks: “Dance Yourself Clean”, “Home”, and “I Can Change”