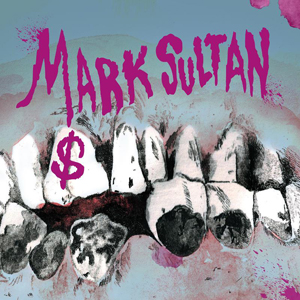 Mark “BBQ” Sultan is likely best known for his work with King Khan in the King Khan and BBQ Show. He’s one of the two cackling, Loki-esque tricksters at the head of the doo-wop/garage rock/soul scene. On $, his newest solo record, Sultan fuses elements of sounds as disparate as the zany rock of Frank Zappa to Stoogesy proto-punk to Sam Cooke R&B.

From the outset of album opener “Icicles”, it’s clear this isn’t the party fun of the King Khan & BBQ Show. Clocking in at six and a half minutes long, the track is a psychedelic freak-out of epic proportions. Sultan’s guitarwork had always seemed strong if not amazing. Here, though, the fuzzed-out wails and howls are masterful. The genre skips as the track does, resulting in the Latinate quick-strummed guitars and maracas of “Don’t Look Back”. But, before we get too far away from the wacky, let’s take a look at one of the last lines of the tune: “Makes me glad to contemplate your doom”.

Sultan’s croon on soul ballad “Ten of Hearts” is damn impressive, reinforcing the mastery he’s shown on tracks like “Why Don’t You Lie?” and “I’ll Be Loving You”. The simple, arpeggiated guitar line and stomping drums perfectly background the multi-layered Sultan harmony. If the track came up on an oldies radio station, I don’t think I’d doubt its origin. The song is saccharine and sad, a lone violin joining in the mourning near the end of the track.

The rollicking, tense garage rock of “Status” follows, with the brilliant chorus “status is the symbol for the shit I burn at night.” Sultan’s venturing into Velvet Underground/Iggy Pop territory, the chugging guitar and drums stomping out a straightforward rhythm until a kitchen sink crash slows things down for a few seconds and a high-pitched feedback squeals. But, as soon as the grit settles, Sultan’s back to the sweet, churning out a take on 60’s garage pop in “I Get Nothin’ From My Girl”. Lines about putting his head in a plastic bag aren’t quite from the 60s, but the sound’s spot-on. Where, in a King Khan & BBQ Show track Khan would lilt out a sly guitar solo, here Sultan whistles a sweet little ditty. But, just like Zappa, the listener can’t get used to any one sound or genre very long, as the Chuck Berry guitar lick that opens “Go Berserk” swings into full effect.

The minute long intro to “I am the End” is a bit slow, Sultan’s voice peaking in the lo-fi mix. The song that follows is a decent enough ballad, but it’d be tough to get to it without being able to skip through the too-long intro. “Misery’s Upon Us” is another fusion of happy sound and down lyrics, a sound that’s probably a squealing violin producing a Velvet Underground “Heroin” tension underneath everything.

Oh, did I mention the standout “I’ll Be Loving You” from last year’s sublime Invisible Girl? Sultan seems to remember it pretty well, contributing a more uptempo version of the song to this disc. “Waiting For Me” is a great straightforward garage rock track, while the six and a half minute psych freakout of “Nobody But You” that closes the album features some great echoed vocals and fuzzy guitars.

While $ might not have the same fun and intensity of a King Khan & BBQ Show record, it certainly shows that Sultan has the same chops and depth of ideas that Khan has. And, really, isn’t that what a solo album is all about? Showing up the other guy in your band? Or maybe it’s about using your time well before the other guys come back together.