Sharon Jones & The Dap-Kings – I Learned The Hard Way 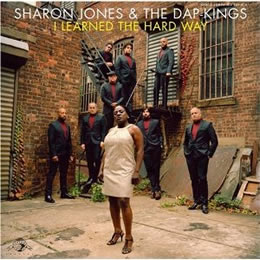 Many people can’t differentiate between what they like and what is good. Assuming that they are the same thing is safe because it makes the issue of quality subjective, which basically takes you off the hook of any responsibility for what you consider quality music. But on the flip side, admitting that something is good even though you don’t like it, well, that calls into question your taste. It’s basically admitting a fault in your taste, and that is not easy to do. Well, I don’t enjoy Sharon Jones & The Dap-Kings. It’s just something I would never choose to put on for my leisure listening. But the question of if it is good is not as cut and dry as that. The overwhelming feeling that I get when I listen to I Learned the Hard Way is that my personal taste is flawed, lacking, somehow not sophisticated enough to appreciate the album properly. These are tough days when you write about music.

I Learned the Hard Way first and foremost always feels professional. Musically, it is genre music, not so much reinventing the soul music of the 60’s but recreating it, right down to the backing doo-wops. Always feeling completely authentic, it also makes you to wonder why this music needs to be made, when any vinyl collector could probably shoot me a dozen records that are the real deal. While it is easy to get swept up immediately in “The Game Gets Old”, all the tricks feel orchestrated, from the horns to the always reaching vocals. Now, to say Sharon Jones reaches isn’t a dig. She grabs shit when she reaches. Her voice sounds, well, soulful, like someone much wiser than me is telling me a life lesson over a martini and a cigarette.

Unfortunately, Jones rarely tells me much worth hearing. “Money” works as a throwback or homage, but sounds a little unconvincing coming from someone who just performed on Saturday Night Live. Jones is not singing her own blues; she is singing the blues of humanity. “Mama Don’t Like My Man” comes across as a lovely album closer, but again, it is limited to being about, well, mama not liking my man. Not that empathy is a requirement for enjoying music, but emotional detachment isn’t going to switch me from a soul music dabbler to an aficionado.

And it may be sacrilegious to say, but the album really got kicking when Jones took a break and let The Dap-Kings take over on “The Reason”. “The Reason” shows the backing band flexing their musical chops, rather then just continuing with the formula that dominates the majority of the album. Fans of Jones will note the continued progression from funk to R&B; this isn’t the same album she made two years back but a continued evolution. And who can really fault someone for making a genre album that is a strong specimen of the art form? Fans of this musical style may eat this record up,  but for me to like a traditional soul album, well, it would have to blow me away. This did not.

Experts in soul, R&B, or just Sharon Jones are encouraged to annotate this record for me and tell me why I am supposed to appreciate it. Like when I tried to read Infinite Jest, I could tell there were some good things going on, but I just don’t have the training to recognize what they are. I just wanted Sharon Jones to break my heart and use that powerful voice to tell me a story of lost love not wrapped up in a cliche. With a voice like that, I should be crying at some point over the album’s forty minutes. Instead, I’m just left to debate whether it is an album I just don’t get or if it just isn’t very good.