The Bird and The Bee – Interpreting the Masters Volume 1: A Tribute To Daryl Hall and John Oates 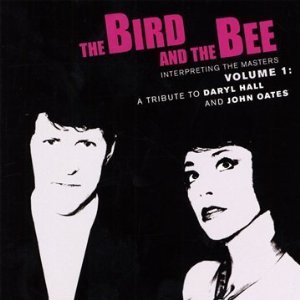 I’m not entirely sure when Hall and Oates crossed over from embarrassing relic of the vinyl and tape era and crossed into retro chic. I am, however, certain that this turn of events pleases me because Hall and his mustachioed collaborator provided some of my favorite childhood songs in the form of irresistible hooks and delightful keyboards. Inara George and Greg Kurstin, better known as The Bird and The Bee, seemed to feel the same way. A year after releasing one of 2009’s best pop albums, they’ve decided to bestow Interpreting the Masters Volume 1: A Tribute To Daryl Hall and John Oates, which is exactly what it sounds like. The LP, eight Hall and Oates covers and one original track, is as fun and interesting as you’d expect from The Bird and The Bee.

Not to be a persnickety, but I think you must approach the album with the attitude that the title suggests: It’s a tribute, not a covers album. While these are covers, George and Kurstin have an obvious respect for Hall and Oates. They preserve the sincerity and fun found in the originals while still putting their stamp on each song. In the process, they add some unexpected layers of the songs’ meanings—or maybe I’m just overanalyzing.

However, the classic “Maneater” is the perfect example of how a good cover can pay reverence to the original and reveal something new about itself. The song’s melody is as catch as you remember it, but the 80s cheese is dialed down and today’s retro-80s-cheese is amped up with soft keyboards and guitars that are just as inoffensive as Hall and Oates’ original catalog. However, George’s cracking vocals on the refrain “Watch out, boy, she’ll chew you up” is almost heartbreaking. Yet, the fact that a female is now singing this song as a warning to a man makes me wonder whether George is undermining the competition or being sincere. Then I begin to wonder if the original was a fun narrative or a misogynistic yarn—something I never questioned in the past 20-plus years of listening. Just to add to the flavor, the poster girl for strong, defiant women everywhere—Garbage’s Shirley Manson—provides backing vocals for the famous “Oooh, here she comes” line. This really fun song suddenly became a lot more interesting. Still, it’s three-plus minutes of pure fun that you can take at face value if you want.

Those details are peppered throughout Interpreting the Masters. The haunting take of “She’s Gone”, with slick harmonies and quiet keyboards, resonates on a deeper level than it has any right to. The narrator, whether or not it’s George in this case, is torn up about the titular character’s abandonment. As the music drops out, she sings, “I think I’ll spend eternity in the city” and you feel that she’ll be the alone as she wanders the city looking for love for the rest of her life. George and Kurstin’s voices come together to bring a level of poignancy to the tale.

Of course, this album is all about Hall and Oates, so the cheekiness is still there. Listen to “I Can’t Go For That” and try to resist clapping or moving your shoulders. The track, as is the case for most of their covers, is a softened version of the original and relies heavily on George’s soft vocals. She’s almost kittenish without being too passive. George is in control at all times, so her confession that she’ll do anything that you want her to rings as sarcastic as it does authentic. Unless you’re a very young or sheltered music fan, you know this song, and the fun of the original bleeds into this one. George and Kurstin must have realized that keeping this song close to its original form was the smartest move because a drastic reinterpretation would only mind you how solid—and I’ll stand by that assertion—the original was.

The original track that opens the album has George recalling a song she heard on the radio and how it makes her think “of you in those summer days.” The Bird and The Bee are giving their mission: a love letter to Daryl Hall and John Oates. That you can make it through the album without laughing at them is an accomplishment. Yet, the real triumph is that they take songs (or guilty pleasures to some) we already know and transform them from fun to interesting. Add to that their ease on the ears and you have a shockingly good album that hopefully finds an audience beyond those listeners looking for an irony.