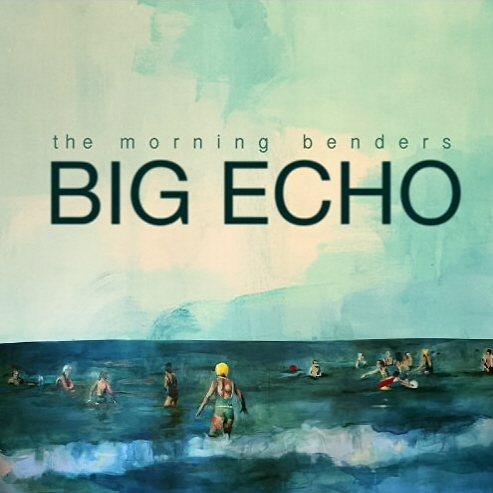 Nowadays dubbing new music as “indie” is as commonplace as serving eggs on a breakfast menu. And with hipsters galore desperately searching for the next Yo La Tengo or Vampire Weekend to appear, the indie-rock scene has grown frantically in numbers. The problem with that is, like anything else, when there is too much of one thing the lines start to blur between what’s actually new and innovative and what’s just more of what you heard last week. That being said, The Morning Benders are an enjoyable three piece outfit from Berkeley, California that shouldn’t be completely overlooked.

Since their debut Talking Through Tin Cans was released in 2008, The Morning Benders have been gaining a lot of street cred; performing with the likes of Grizzly Bear, MGMT, and Yeasayer and briefly gaining the honor of becoming itunes’ “Editor’s Pick”. And their recent sophomore release Big Echo encapsulates that same bubbly pop sound that initially got people’s attention back in 2008 along with a new and more soothing rock ballad sound that’s equally serene as it is morose.

Co-produced by Grizzly Bear bassist Chris Taylor, Big Echo is captivating from start to finish. Regardless of mood or disposition, Big Echo carries enough good vibe to create a completely relaxed and pleasant atmosphere around it. Beginning with the swaying waltz “Excuses”, which reminds listeners of how sunbathing on a small sailboat in the middle of summer feels, the rather short 10-track record needless to say starts off on a more than pleasant note. Its intoxicating melody is only amplified by the band’s beautiful harmonization, simplistic yet cheery guitar strumming, perky piano parts and the soft, echoing “da-dum” vocalization in the backdrop; commonly found in 50’s doo-wop. And just when you begin to hope “Excuses” will never end, the band’s first single “Promises” begins to play. Here we find a sound similar to The Shins carried by a simplistic and repetitive dreary rhythmic guitar riff and soothing drums which pitter patter softly in the backdrop alongside a distant piano melody and echoing vocals.

Next up is the sweet bass driven number “Wet Cement” that mentally pieces together memories previously thought to be long lost; of first dates, family trips to the beach, and long walks in the park. Then the much too short “Cold War” picks up the pace with catchy guitar riffs and a chilling xylophone part only to abruptly lead into the extremely somber track “Pleasure Sighs”; which drearily portrays echoing vocals, spacey guitar riffs and a soft and lingering hi-hat rhythm. But the record is only momentarily saddened with “Hand Me Downs” quickly upping the pace with its pounding drums, rapturous guitar riffs, and lulling vocals.

Later on we find anthemic “All Day Day Light” which briskly pushes on with a unique guitar and bass duet, winding drums and passionate vocals. Then, the somber “Stitches” takes over with eerie and distant vocals amidst a dreary combination of distorted guitar and keyboards that instill the feeling of driving alone through a barren desert at sun set. Big Echo finishes off just under 40 minutes with the strange sounding track entitled “Sleepin In”. Picture someone recalling a distant memory from their childhood narrated by Wes Anderson and animated by Alex Ross and you’ve got “Sleepin In”; a curious number which slowly grows louder and louder, ultimately drowning itself out in the process.

Overall, Big Echo is a captivating and refreshing new interpretation of Indie-rock. Whether or not it has any lasting value remains to be seen, however, for now Big Echo provides its audience with a splendid assortment of pop-rock songs. So I urge you to forget about “timeless” quality and simply enjoy Big Echo for what it is: a collection of simplistic pop-melodies written and performed solely for your enjoyment.