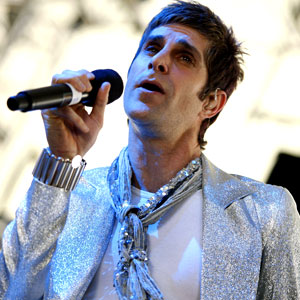 Believe what you want, but Perry Farrell is 51 years old. The man doesn’t look it. He doesn’t even act it. Actually, he doesn’t even look a year past 32, but maybe that’s what you get when you start three or four different bands, throw an annual festival, and treat the stage like your sexual playground. Wait, what? Anyways, the saucy frontman of Jane’s Addiction celebrated his birthday Tuesday night, and to entertain guests, he had his lil’ alt rock band play a gig.

But wouldn’t you know, the event marked a first in Jane’s Addiction history, as newly minted bassist Duff McKagan (you know, that guy from Guns N’ Roses?) made his debut with the band. Yes, it’s finally official. What’s more, they started in style, performing a pretty riotous cover of Led Zeppelin’s radio-favorite, “Whole Lotta Love”. You can see video below, too.

So, what’s this mean for Jane’s? It means Avery is out, McKagan is in, and not just as a hired gun for the studio, either. Rolling Stone reports that they received a press release officially confirming McKagan as a new member, meaning studio work, touring, etc. What this means for Velvet Revolver — yeah, they still exist apparently — is anyone’s guess. Without a frontman, the whole project seems dead in the water. However,  Slash told Rolling Stone: “We want someone who is really good that hasn’t been recognized by the whole country as being amazing, but somebody who is just on the precipice of just being discovered.”

There’s a line from Indiana Jones and the Last Crusade that applies here. It’s shortly after the treacherous and greedy Dr. Elsa Schneider falls into the infinite black abyss and Junior, aka Indiana Jones, desperately reaches for the holy grail, to which his father, Dr. Henry Jones, Sr. , who’s holding him on the ledge, instructs: “Indiana, just let it go.” Perhaps that might be the best move for Slash. Really, it doesn’t seem like anyone else is holding on anymore.

Tangent aside, this is pretty sweet news for Jane’s Addiction. Bring back “Just Because” and “Superhero” into set lists, please? Even though nobody really likes Strays but me.