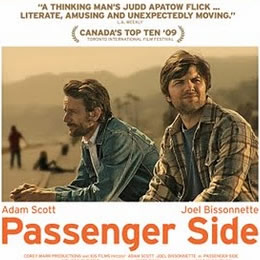 It’s good to have friends. For filmmaker Matt Bissonnette, having a friend in the music industry has helped out repeatedly the music of his films. And luckily for Matt, that friend is also the co-founder of Merge Records and frontman for Superchunk Mac McCaughan. The relationship has resulted in two film scores, but with his new movie, they tried something different.

For Passenger Side, McCaughan’s task was to curate the film using the director’s suggestions as a starting point and seeing what he could come up with (via The Playlist). The result is one amazing soundtrack, including classic cuts from Superchunk, Wilco, Silver Jews, Dinosaur Jr., Leonard Cohen, and Islands. No release date has been scheduled for the film, but it is playing various film festivals while  in search of distribution.

In other Superchunk news, the band is wrapping up their first proper album since 2001. In an interview with Spinner, McCaughan revealed that fans should expect more like the 2009 Leaves In The Gutter EP, adding in a separate sit down with the Winnipeg Free Press that “it’s more guitar-oriented than 2001’s Here’s to Shutting Up. And maybe a little louder in general.”

The band has a couple festival dates lined up, but no one should expect a full tour, with McCaughan stating, “I don’t think we’ll ever do another three-month tour or anything like that, but we certainly still enjoy playing live.” Hey, we’ll take what we can get.

Enjoy the tracklist below. More details on that Superchunk LP as they become available.