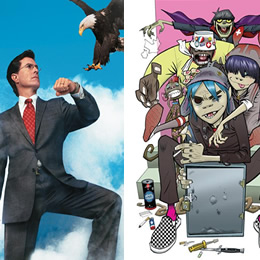 If there is one thing I learned from vaguely paying attention to Coachella reports (besides the fact that “clusterfuck” better not get overplayed, because it’s a terrific word), it was that Gorillaz flat out disappointed. People seemed to be expecting something larger than life, like Who Framed Roger Rabbit? the concert, but instead got a plain-old band performance. So basically, they didn’t care about music, they just wanted fireworks. In fact, I want to apologize to the world on behalf of all the spoiled Californians who seem to just whine about the event. If you can’t have fun outdoors for three days with some of the best music on the planet, well, I guess I just feel sorry for you.

Well, Damon Albarn’s animated band had a brief faux interview and performance on The Colbert Show last night, in which cartoon spokesperson Murdock appeared to apologize for the lack of show in the show, claiming work visa difficulties and saying that Albarn and Jamie Hewlett are his hired doubles to play Coachella for the real band. Colbert then concluded it would be pointless for him to continue, noting if it wasn’t the real band than the interview wouldn’t be conducted by a real host.

Colbert’s “double” soon appeared and introduced Albarn and Hewlett. What followed was a typical Colbert interview, with the “host” taking center stage and using the guest as a comedic foil. Albarn seems pissed, but then reveals himself to be in on the well-rehearsed joke, a gentle reminder why I fast-forwarded the first 15 minutes. (Nothing against Colbert, but if it is not Breaking Bad, Lost or HBO Sunday Night programming, I just don’t have time for you).

As for the performance of “Stylo”, it went perfectly well, sounding record-quality and featuring guest-vocalist Bobby Womack who seems to be a bit of a ham, but a ham with the voice to warrant it. The thought that I couldn’t shake, in both listening to Albarn spout off clear and insightful sentences in the interview and watching the performance, is that this guy used to have a rivalry with the drunken Oasis brothers. I guess we can call that race now, with all the delegates going to the dude who’s still relevant.

Check out the performance and determine if an hour+ of this is really worth complaining about (via TFB). Oh, and please get Mos Def to show up to at least one of these!