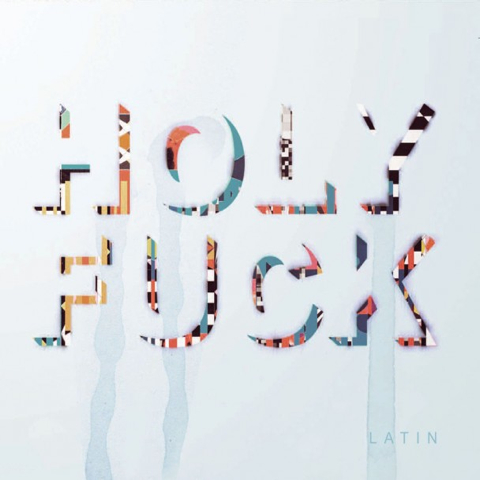 You wouldn’t really expect a band that goes by the name Holy Fuck to trade in subtlety. And, for the most part, they hadn’t. Their first two records featured plenty of spastic, loopy electronics, goofy samples of what is probably an Atari and thrilling, driving beats. So, it was a major surprise that the album’s first track, “1MD”, opens with low, slow tones and a far-away, echoed sample of someone with a deep voice talking slowly. This builds for about three minutes before adding too much else (a restraint and dedication to an atmosphere I don’t remember in any prior Holy Fuck tracks). More shimmering sounds bubble up to the surface and grumbling bass feedback sit in the back. At nearly seven minutes in, a simple, Casio keyboard rhythm sample pops into place, sounding a whole lot more like the Holy Fuck I’d known.

The funk that stirs up just after the wall of noise fades away is an excellent testament to the addition of a permanent drummer and bassist to the group. Multi-instrumental/electronic mad scientists Brian Borcherdt and Graham Walsh had been playing as a duo, touring with a rhythm section. But, it seems that bassist Matt McQuaid and drummer Matt Schulz have stuck on, and it’s definitely a good addition. The electric, pulsing bass line is frenetic, the drums popping, the two coming together to produce a beat that 94% of the world couldn’t help but dance to(that statistic is accurate, I’ve double-checked). McQuaid, in particular, shines on the track, his bass picking intricate and rabbit-quick.

Sort-of title-track “Latin America” follows in a similar fashion, the swinging drums and synths pumping. A simple, understated piano tamps out the chords, though, a move one wouldn’t expect in the midst of the bombast. It’s more like Cold War Kids in an instrumental electronica phase than like Daft Punk, an interesting new move for Holy Fuck. “Stay Lit” is whimsical, flowing, almost like a synth-pop soundtrack to a story about a prince fighting an army of villains. It’s triumphant, epic.

“Silva & Grimes” follows, proving to be a bit of a dud. It walks in place more than anything else. The pace doesn’t change all that much, the depth of sound remaining largely consistent as well. The plunking Casio rhythm that opens “SHT MTN” is familiar Holy Fuck territory as well. The insistent cow-bell and stuttering, spacey vocal swashes, though, are a different story. The stabs of feedback that punctuate the wordless “oohs” that comprise the melody are interesting, too. But, altogether, it’s a bit too long, just over-staying its glad welcome by a minute or so. The astoundingly fast cymbal beats and the rapidfire bass line on “Stilettos” are white hot, but the equally impressive pulsar electronics and NES-soundtrack synths that follow don’t quite match. Altogether, it sounds like the ideal music to go behind one of those “Sonic the Hedgehog” mini-games where you race around in a tube, trying to collect the most rings.

“Lucky” follows, its distorted, choppy electronics impressive and cool, the slinky bass muscling up underneath. There even seem to be vocals, however reverbed and distorted, near the five minute mark. “P.I.G.S.” closes the disc out, the synth and bass coming together to produce a churning, off-kilter rhythm while electronic washes of sound swirl in and out of focus beautifully. The distorted synth line that comes over the top is reminiscent of It’s All Around You-era Tortoise, which is a comparison that this entire album deserves, though perhaps funkier.

All in all, Latin is a strong step forward from 2007’s LP. The permanence of the rhythm section certainly helps quite a bit, but the heart and soul of this band is it’s willingness to experiment and bravery in the face of mounds and  mounds of electronic gadgets. Add those two halves together and you get one strong record.