Laura Marling- I Speak Because I Can 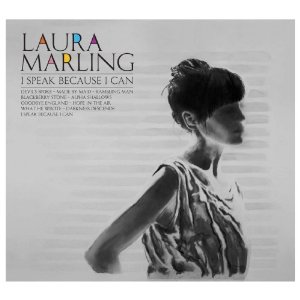 Laura Marling is very much the doyenne of the UK new folk movement, already seemingly with a pedigree that defies her young years. Originally with indie folk outfit Noah and The Whale, Marling split from the band before their first album release and produced a solo 2008 debut, Alas I Cannot Swim, which brought along a UK Mercury Prize nomination and set seasoned music journos eulogizing. That album was produced by her ex, Noah and The Whale’s singer-guitarist, Charlie Fink, and as the subsequent partner of Marcus Mumford for the past year or so, Marling clearly likes to keep it in the folk family.

Her second release, I Speak Because I Can, is produced by Ethan Johns, the son of legendary engineer-producer to rock’s who’s who, Glyn Johns. Johns junior has some pretty impressive credits too, not least with the likes of Kings of Leon and Ray LaMontagne. Johns exercises a deft hand over proceedings, knowing when to embellish and where to leave space for Marling’s voice to rule. Rather than simply cataloging the trials and turmoil of young love, the album speaks with a voice of maturity as Marling explores the roles and responsibilities of full womanhood, frequently using traditional vernacular and imagery to develop an essentially modern thesis.

The monochrome album cover oddly makes a play to undersell the contents. Maybe that’s deliberate. Marling is depicted as almost featureless, in shadow, thin armed, slender necked, hair up, almost in pain. The only color infills the As and Rs of her name. Open it out, and the lyrics are spread across in tiny capital letters with minimal breaks to denote each song. The typography is only likely to benefit an optician. These are words as wallpaper: Read them at your peril or at least with an eyepiece. Make the effort, though, and it’s worth it. Marling is a really accomplished wordsmith and never takes the easy option with her imagery or rhymes. Her diction is clear enough anyhow for you to set aside the sleeve and just listen and wonder.

Vocally, Marling has a transatlantic tone to her delivery which, if you don’t know her, could make her believably New World, rather than southern English. She can sound like Joni Mitchell, she can come across as a female Dylan, each the company of legends you can live with, but mostly she sounds like Laura Marling, which is how it should be. The variety of delivery she employs is just right, often quiet, assured and never overblown, yet ever capable of sudden, strong bursts of great emotion. The melodies are richly compelling and freshly served. A quieter song follows a more strident one, urgent banjo gives way to gentle acoustic, so it’s like visiting a large house with quite different rooms, all connected but with their particular moods and tones.

Some of these songs must date from the time of Marling’s relationship with Fink and centre around her experiences. But much of the subject matter sees the singer step into others’ shoes, like she is trying to reconcile different aspects of her own personality to decide what kind of woman she will be. No easy conclusions are reached and, no doubt, the inner conflict of these newly adult choices will roll on. From the opening Dylan-meets-dervish “Devil’s Spoke” where Marling lifts her skirts to an progressively frantic, banjo driven accompaniment that ends with lovers “eye to eye, nose to nose/ripping off each others clothes in a most peculiar way” to the final optimism from adversity that spins out of the title closer, we get tinder and fire in equal measure.

Album highlights? It’s a case of how long have you got. “Rambling Man” is delivered like a young Joni Mitchell, hair curling at times, peppered with delicious harmonies and energetic Mumford & Sons backing. The lines “It’s hard to accept yourself as someone you don’t desire/As someone you don’t want to be” suggest the bleakest self-recognition, but it’s just one side of the coin in Marling’s treasury. “Alpha Shadows” is a glorious tune with a strident, gypsy inspired melody, all fervent strumming and resonant chimes, surrounding the rise and fall of Marling’s impassioned tones. A break-up song of the highest order.

The beautiful “Goodbye England” sees Marling looking back in tenderness, her soft, vivid memories laced with conflicting emotions about the dual keys of monogamy and freedom. “I try to be a girl who likes to be used/I’m too good for that/ There’s a mind under this hat” follows mention of an unsent letter “twenty-two pages front and back/But it’s too good to be used.” The breezy melody which interleaves the Paul Simon-like “Darkness Descends” neatly contrasts with the song’s imagery of darkness and winter giving way to light and summer sun.  From the gentle sensitivity of “Blackberry Stone” to the austerity of “Hope In The Air”, Marling runs the whole gamut of emotions and has produced a near-seamless masterpiece.

This is a great record with a certain immediacy yet more than sufficient depth to make you grow fonder of it with repeated plays. There are more sweets here than in a candy store, and some of them are unexpectedly bitter-sweet. With I Speak Because I Can, Laura Marling has swerved the dreaded second album syndrome and smacked it between the posts with a genuine, heartfelt flourish. Do not miss it.