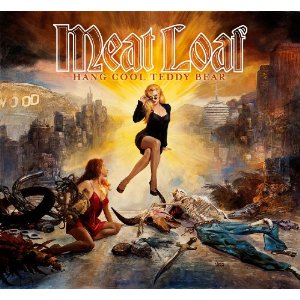 Maybe it’s my theatrical mind/training, maybe it’s my love of hyperbolic, tongue-in-cheek music, or maybe it’s my love for music that is so ridiculous and delivered so earnestly that it makes me deify the juggernaut that is Marvin Lee “Meat Loaf” Aday. No matter what the reasoning is, I will unabashedly be a fan of his until they put me in the cold dead ground and I become transformed into a bat and ride a motorcycle into hell.

I will also be the first to agree that when it comes to solid output by Mr. Loaf… well, it ain’t so solid lately. His new album, Hang Cool Teddy Bear, is his fourth without the songwriting chops of eccentric and verbose songster Jim Steinman in the background. Historically that has meant certain death for a Meat Loaf album. Bat Out of Hell, Bat Out of Hell II: Back into Hell, and Dead Ringer were all popular records and all of which consisted entirely of Steinman-penned songs. Outside of those albums, Meat Loaf had minimal success with tunes either he wrote or had others write for him. However, with Hang Cool Teddy Bear, The Meat might have broken his streak of bad, non-Steinman albums.

The songs here follow the story of a wounded soldier’s daydreams. They are meant to be 13 alternative versions of his future; they are linked by the soldier’s visions, not of his past life, but of possible future lives. Meat Loaf even goes as far to have PDFs on his website of chapters based on each song that you can download if you sign in through Twitter or Facebook. I myself am freaked out about everyone knowing my business on both things, so I didn’t download them, but goddamn I want to.

Now I’m going to add a caveat to this review: If you don’t usually like Meat Loaf’s music, if you don’t like big, theatrical songs, bombastic rock ‘n roll, ridiculous song topics and guitar solos, then you probably won’t like this album. If you hated The Darkness, you won’t like this (Justin Hawkins, former lead singer of The Darkness, even wrote two songs for Teddy Bear). But, if you can appreciate the fact that Meat Loaf is in on the joke and just wanted to, as he has said in interviews, make a big fun rock record, then you will enjoy it. Turn your brain off and start rocking.

For this album, Meat Loaf has collected an all-star list of collaborators and songwriters. Everyone from Rick Brantley to Jon Bon Jovi, to hall of fame songwriter Desmond Child—who wrote Bon Jovi’s “Bad Medicine”, “Livin’ on a Prayer”, and Kiss’s “I Was Made for Lovin’ You”— earn songwriting credits on the record. The album also includes guest musicians, including Steve Vai and Brian May on guitar, and American Idol judge Kara DioGuardi, the aforementioned Hawkins, and Jack Black on vocals. Even Hugh Laurie (yes, that Huge Laurie) shows up on piano. Who else but Meat Loaf could pull all these obscure and amazing talents together in one place? No one, that’s who. He’s Meat fuckin’ Loaf. You don’t turn him down.

As far as Meat Loaf himself on the record, well the guy can still wail. Fun fact: Meat Loaf is 62 years old. Listening to his vocals on this record, you can barely hear the 62 years of hard drugs, drinking, women, and bacon. He hits some notes on this album—granted probably with some studio help, but I’d like to think not— that blow my mind. The guy really does still have it, both vocally and theatrically. He can still rock and make you pump your fist better than anyone out there. I have a feeling seeing him in concert—he is on my top five people/bands to see live before I or they die—would be a let down, but I will believe that he can still pull it off live.

Lead singles “Peace on Earth” and “Like a Rose” are definitely highlights on the album. “Peace on Earth” starts right out of the gate, showing you that Meat Loaf is having fun. The track utilizes an orchestra, slamming drums, and a rocking guitar intro, then lyrics like “Right world, wrong time/and they say to me ‘hang cool teddy bear.’” “Like a Rose” features Jack Black on backing vocals and sounds a lot like a Tenacious D song, but mixed with some Beastie Boys call and response vocals. It only makes sense Black would join Meat Loaf on this record since Meat Loaf played Black’s dad in Tenacious D in the Pick of Destiny. Plus, who better to mix Meat Loaf with than the hardest rocking band in history?

Other highlights include the Hawkins penned “California Isn’t Big Enough (Hey There Girl)” which has one of the greatest, cheesiest opening chorus lines of all time: “I can barely fit my dick in my pants.” I’m serious. When I first heard it I laughed out loud. It’s incredible. When you think about it, only Meat Loaf can pull of a line like that and have it not sound out of place. Also, the other single, “Los Angeloser”, features the spoken word intro “Yo baby, I wrote you this poem. I’d like to dedicate it to ya” which is followed by “I’m just a white boy. I play the guitar. I put my pants on. I drive a shit car up into the valley to see my girlfriend. She got a big couch. She drives a Mercedes Benz.” The delivery on it is spot on. Trust me.

And I’d be remiss if I failed to mention the love song “Let’s be in Love”, featuring long-time Meat Loaf touring vocalist Patti Russo. It’s on par with “I’d Do Anything for Love” in its amazingness. Russo’s voice is a perfect foil to Meat Loaf’s soaring tenor.

As opposed to only going through all the good parts of the album—of which there are many—I’ll recount some of the weak points. The song “Did You Ever Love Somebody” is one of the valleys on this mountainous record, and it’s a deep valley. It’s one of the few slower songs on an album that clips along at a pretty steady BPM overall—which is another low point…where are the slow songs like Bat Out of Hell’s “Heaven Can Wait”? Give us a chance to breathe Meat! “Did You Ever Love Somebody” just isn’t very effective. It’s a mid-90s attempt at a rock ballad, and it doesn’t stick. There is also the weak track “If It Rains” which, despite some amazing Meat Loaf vocals, lacks the punch and immediacy of the rest of the album. What’s more, the album as a whole is a little too slickly produced. Everything is pushed forward and present, and, at times, it’s a little overbearing to have the guitars, drums, and vocals all in your business.

On a whole, Hang Cool Teddy Bear is an amazing/amazingly silly, but serious, rock record. It will take some alone-time-bedroom-listens-so-no one-will-know for those cooler-than-thou types, but just as much as you secretly loved The Darkness, you’ll love this. Meat Loaf’s vocals are still goddamn incredible, and the album is so much fun. Long live The Loaf, and look out for my musical based on Meat Loaf music coming to a theater near you in the next year or so (hopefully).