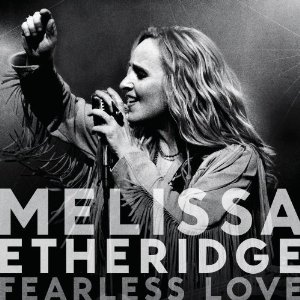 Given that Melissa Etheridge recently announced her split with her partner of nearly nine years, one might expect that her latest effort, tenth studio album Fearless Love, would lean toward the confessional. It’s what we’ve come to expect from Etheridge: She’s always been candid with matters of her personal life, and much of this experience informs her songwriting. As Etheridge herself states on her website, it’s always been about the songs. In this instance, Etheridge says, “each song had an ingredient of love and fear, and the battle between the two.” The album, in fact, had a title before it had a title track.

If this was to be the case, though, and the album was to be all about the songs, Etheridge might have showcased her voice a bit better. As is, many of the songs drown in their own arrangements, no surprise considering that album-producer John Shanks has also been responsible for the radio-friendly fare belonging to the likes of Celine Dion, Kelly Clarkson, and Bon Jovi. It’s the sort of thing we see all too often these days: slick, easily marketable music, marked by heavy choruses and an overreliance upon power chords. One might argue that the use of loud guitars and heavy drums would be the perfect way to complement Etheridge’s raw, gravelly voice, something that’s always been famous in its own right, but I would disagree. Besides, in this instance, the majority of the heavy choruses fail to find a memorable hook, rendering a number of the songs relatively indistinguishable from one another.

Twenty years into her career, however, and with a sizable and devoted fan base, Etheridge has also afforded herself the ability to take artistic risks, putting out music that represents a step away from what her fans might have come to expect from her. For this album, Etheridge drew upon hard-rock influences, with certain tracks recalling Led Zeppelin or … U2 and Coldplay, anyway. The results are mixed.

Album-opener and first-single “Fearless Love” is sure to find plenty of airplay; both “Love” and the following track, “The Wanting of You”, call to mind Coldplay or later U2 with their piano-infused openings. Album-standout “Company” will no doubt see plenty of airplay as well, but with its mid-level tempo and its less-manic chorus, it’s easily the most enjoyable track on the album.

“Miss California” is a twangy affair that presumably aims to take digs at Carrie Prejean or Proposition 8, or both. Etheridge’s heart is in the right place, as it always is, but the result is a bit clumsy: “Your propositions make me feel so cold when the hand that’s trying to hold me down is the one that I’m trying to hold.” Moreover, it feels like a less-personal retreading of some of Etheridge’s usual subject matter. The bluesy-rock track “Nervous” suffers from the same weight of awkward songwriting, with its chorus of “Ooh, you make me nervous, ooh, you make me want to run away and hide … when you look at me I just can’t lie, ooh, you make me nervous tonight.”

But all is not lost. “Indiana” calls to mind a Midwestern, small-town sensibility – relocate Tom Petty’s “good girl … livin’ in Reseda” to the Midwest and you pretty much have an identical tale. “Indiana” is simple but sweet, a story of a girl who doesn’t come from much but has big dreams.

Finally, for an album that is supposed to lean toward being more hard rocking, the ballads are actually more enjoyable than the balls-out grooves. Strangely, though, the majority of the ballads are reserved for the latter half of the album, when Etheridge might have done well to sprinkle them throughout. “Only Love” and “To Be Loved” help to round out the album, and though the latter is decidedly darker than the former, they certainly sound a lot alike, what with much reliance upon simple acoustic guitar work.

Album-closer “Gently We Row” is another bright spot in the line-up. Its wistful and introspective tone pairs well with the lyrics, which focus on the relationships between mothers and daughters and the shattering of certain illusions.

In all, though, there’s plenty to like here, but not enough to love.