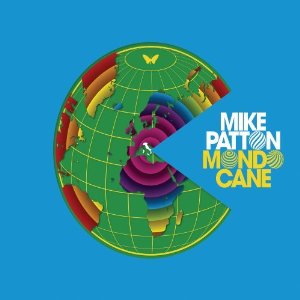 As is well-documented here, Mike Patton can be a bit of an eccentric in the music community. His personality, his experiments with vocals, and his outright disdain for the typical “rock star mentality” are all commonly known facts. For those of you, however, who have not gleaned anything from his foray into the haunting melodies of Fantomas, Patton has a soft spot for Italian culture and dark humor (see: Pranzo Oltranzista, Delirium Cordia & Director’s Cut).

His wife, who is of Italian heritage, must have really struck a chord though, because Patton has not only been living in Italy, but taken on quite a fancy for Italian pop music — and we’re not talking ’90s French europop stuff. We mean classic Italian tunes from the ’40s and ’50s, including the contemporary era of Gino Paoli, The Blackmen, and the late Luigi Tenco. Donning a pencil-thin mustache and white suit, Mike Patton has launched himself soul-first into his newest solo outing, entitled Mondo Cane (pronounced KON-ay).

The truest beauty of Mondo Cane is proven by the same dynamic appeal as bands like Rammstein and Aterciopelados: you do not have to be fluent in traditional Italian speech or opera to fully experience this music. Mondo Cane is a time machine, guided by Mike Patton, a backing band, and a 40-piece orchestra into contemporary Italian pop music, with the usual avant garde flare that makes Patton what he has been and always will be. There are songs that feel purely romanticized in nature (“Il Cielo In Una Stanza”, “Scalinatella”), those that invoke the feeling of a silent film comedy of errors (“Che Notte!”), and those of a mobster swagger circa 1950 (“Ore D’Amore”). There is never a shortage of entertaining moments throughout, and while it may not cater to a vast fan base, this album is one done out of sheer love for the source material — a tribute in its highest quality to classic Italian pop that could warm anyone’s record player in a millisecond.

This is not a rehash of Mr. Bungle and the days of extravagant metal-esque alt rock, but a look into the more eloquent and surreal mind of Patton and his respect for other cultures. When he is not somewhat overpowered by the atmospherics and intros, Patton’s vocals shine brighter than anything a Lionel Richie cover could aspire to. Tracks like the very popular “Deep Down”, with its lounge and dance hall groove, allow Patton room to really echo across the senses with every held note, emitting veritable passion between the chorus and the whispers alike.

The Luigi Tenco piece “Quello Che Conta”, with its Ennio Morricone vibe, could best be placed in a spaghetti western death scene, and its sadness is so tangible and thick you could strip it with a knife. Patton sings gracefully and quietly, the voice of a true artist at work, making love to the music. Even on a more surf rock golden oldies-style song like The Blackmen’s “Urlo Negro”, Patton overturns a wild and energetic track and glazes on his loud, wailing scream to the vocals, making the song itself pierce your very mood. This is probably the one instance where Patton can appeal to both new age alternative fans and their grandmothers simultaneously.

From the opening wide of “Il Cielo In Una Stanza”, to the waltzing bombast of “L’Uomo Che Non Sapeva Amare”, to the raspy smoke room vibe of Gino Paoli’s “Senza Fine” for a close (complete with applause and epic violins and brass), nothing could possibly define this record beyond brilliant and so originally laid down. If one were so inclined, they could easily mistake Patton’s work here to be strictly his own, as Patton has added his own unusual flavor to the vocal performance (would we expect anything less from an Icon of Rock?). The orchestra swoons to the melody perfectly, never trying to overdo itself more than need be, but not shying away from opportunities to shine as wonderfully as the performer; the warmth and colorful textures of the music could only be better served on a nice, crisp vinyl, and there could be no rival to that presentation…period.

By far, the most cut-and-dry perfection to display Mondo Cane‘s transcendent presence is in “Scalinatella”. I know little about the origin of this song, but upon hearing it here, I was floored by the gentle string acoustics and Patton’s ability to transform himself from the typical experimentalist to what can only be described as an authentic representation of old Italian music from a lost 45. Everything from Mondo Cane would fit suitably into a spaghetti western film reel or perhaps a phantasmagoria setting, crafting a scene of smoke and limelight so exhilarating, you are taken aback by its existence alone. ’50s Italian pop, as interpreted by the Californian Faith No More front man…who says it has all been done?