Minus the Bear – Omni 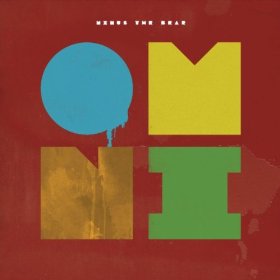 Last year in October, I stumbled upon an instrumental track of a song in the works by Minus the Bear. Little did I know that this song would later be “Into the Mirror”, which pops up on their latest record, Omni. Nevertheless, when listening to this vocally stripped song, it seemed as if all was present within the track. You have that dream-like feel masked by that revamped 8-bit sound of theirs, the ever so glossy melodies that slide in your cranium, and the sharp bite of something bitter sweet. You know, that Minus the Bear sound with a hint of The Animals’ “Please Don’t Let Me Be Misunderstood”? (Just think of the guitar and keyboard tracks.) The track was enjoyable to say the least. However, it wasn’t until a few days ago when my thoughts of this upcoming record went from “enjoyable” to “ut oh.” Okay, let me rewind and explain.

Omni opens up something interesting and rather fantastic with “My Time”. Much like “Burying Luck” on the group’s previous effort, 2007’s incredible Planet of Ice, this song has a tremendous build up that leaves the listener pleading, “What comes next?” This is the problem, however, because what comes next isn’t necessarily what most fans would want to hear. The recipe for this? A fuse of overtly cheesy synth parts that replace all the elements discussed above. Questions surface: What’s happening? Where is the subtly? How did Minus the Bear’s sound become flamboyantly obnoxious? When did they start writing hammy lyrics?

It’s clear that subtly has been stricken from this band and replaced with lame lyrics in reference to an intimate fuck. (“Turn off the lights and touch me in the dark” or “just yell out my name baby”, take your pick.) You would also think that after four albums, frontman Jake Snider would have more to talk about other than sex, drugs, and rock ‘n’ roll. But that that’s not the case, at least if we’re to consult Omni as a reference. C’mon guys, it’s the subtle lyrics and sharp sound that made you so successful and fun, which is why it’s upsetting to see it missing. Not just missing, but completely eroded. It’s as if Snider decided to drop the ball lyrically and take a massive step back. Just listen to “My Time”, “Secret Country”, or “The Thief” and compare the exaggerated lyricism to that of, say, “White Mystery”, where the lyrics are beautifully illustrated (“You can’t hear the music/But we’re playing the same tune”).

Not to attack Snider but look out for his repetition, too. He has no qualms in overusing his choruses here. Whether it’s “My summer Angel keeps me on the run” cried out over nine times in the span of four minutes, as is the case on “Summer Angel”, or the mind numbing line “Running out of excuses, when we know what the truth is…” in the aptly titled “Excuses”, the lines only feel drawn out, meaningless, and above all, predictable.

To lighten up the mood, however, fans will find comfort in songs such as “Into the Mirror”, “Dayglow Vista Rd.”, and bits and pieces of “Excuses” and “Summer Angel” (as repetitive as they may be as mentioned before). Why? Simply put, the songs are intimate and catchy as all hell. When looking back on albums such as 2005’s Menos el Oso, it’s hard to forget the song’s intimate nature, how they feel alive in nature. Whether in a bar, a garage, or my room, the songs felt thoroughly engaging. What’s more, and the point I’m trying to make, is that they all had a significant place in the album and if moved the whole thing would fall apart.

With Omni, one could shuffle through the album and never notice or care what came next. (Well, unless you’re waiting for a song that doesn’t insult you.) Maybe it’s the transition from record labels — from Suicide Squeeze to Dangerbird — but cohesion is what many fans will miss on this record. It’s almost as if you want the record to end. But with so many familiar signatures, especially in the songs that do work, you’re left mindlessly searching for more of that aforementioned intimacy. It’s there, in Dave Knudson’s guitar licks and in the upbeat warmth of Erin Tate’s drumming, but it’s too little and too subdued.

Creating a sound in complete contrast to earlier work can be quite the challenge for a band. Yet, change is necessary for bands to survive and not grow stagnant. Still, some bands shoot for change and find quarters while others find pennies. With the release of Omni, it’s apparent that Minus the Bear has found its pennies, experimenting with a sound that doesn’t fit their overall development. Instead of setting them free, which new sounds are supposed to do, they’ve created an atmosphere of utter confusion, which bleeds into the overall message, theme, and sound– something Minus the Bear was once very clear on. Listeners will not find the next “The Fix,” “Absinthe Party at the Fly Honey Warehouse”, or “Lotus” on this record– they will find something different and it’s in their judgment to decide whether or not they found quarters or pennies. You know my two cents.