Stereophonics – Keep Calm and Carry On 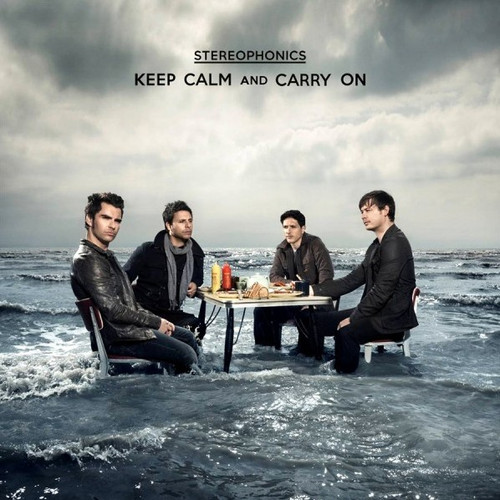 After the release of their 1997 debut Word Gets Around, Welsh rock band Stereophonics found massive success in the UK.  Like a lot of British rock bands, Stereophonics never broke through in a big way in the US. However, unlike acts such as Blur, Pulp, and Supergrass, the middle of the road rock of the Cwmaman quartet was never “too British” and should have been an easy fit on American rock radio. Perhaps the problem in America was that alternative rock was slipping in popularity in favor of nu-metal at the time.

Thirteen years later, an American breakthrough seems less likely than ever. Keep Calm and Carry On failed to break the top 10 in the UK upon its release six months ago, and Nashville’s Kings of Leon seem to have satisfied the recent demand for new, insipid stadium rock. Musically, the appropriately titled Keep Calm and Carry On is more of the same from Stereophonics. While they have always been a meat and potatoes rock band, Stereophonics have achieved brief moments of greatness in the past, thanks to the sometimes insightful and poignant lyrics of Kelly Jones. Unfortunately, none such moments are to be found on Keep Calm and Carry On.

Although formulaic, “Live ‘n’ Love” is the most anthemic arena rocker on Keep Calm and Carry On, primarily because it sounds exactly like an Oasis song.  Showing a rare moment of potential, “I Got Your Number”, begins as an appealing glam rock number.  However, trite lyrics like “you told me lies right to my face; I’ve got your number you’re a fake” kill any momentum, while an attempt at Sesame Street-esque counting a la Feist proves embarrassing without her charm and creativity.

Reviewing an album like Keep Calm and Carry On is really an exercise in futility. This sort of rock tends to prove critic-proof, and Stereophonics are no exception. For listeners seeking an album of capable pub rock, Keep Calm and Carry On will be a hit. However, anyone searching for music that does not reveal a band’s comfort and satisfaction with being stuck in a creative rut should look elsewhere.