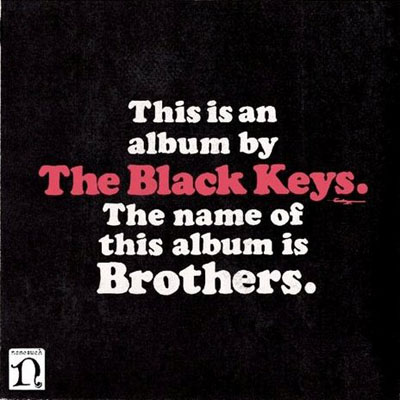 How can modern blues duos produce so much power? Jack and Meg White have done it multiple times on multiple records, and now Dan Auerbach and Patrick Carney of The Black Keys have done it on Brothers, an album title that doesn’t necessarily fit their personal relationship, but shows the kind of connection these two masterminds feel with their music. However, they are not alone on this record, as Danger Mouse joins them again on production (Editor’s Note: On one track) to create an album with such a blues crunch that you’ll never listen to modern rock or eat cereal the same way again.

I’m pretty sure about five separate people came to me a couple weeks ago telling me to hear this album. Multiple e-mails and Facebook messages were sent informing me that the thing leaked and that I needed to hear it immediately. Most people I know aren’t as religious about downloading music as I am, but when this many people insists that I hear a record, I must say I try and listen to them. For once, the general consensus is right: This album is one that lives up to the hype of modern day epic blues.

“Everlasting Light” has that classic boom-kick drum beat that makes you want to drive a car in slow motion. Auerbach’s vocals are that of a fantastic falsetto with a sludgy guitar that reminds of me of Hexus singing about toxic sludge in Fern Gully. The song maintains the same beat, tempo, tone, and everything, never getting above anything to hectic until the end, as a loud, rocky, buzzy sort of sound accompanies the song’s final moments. It then fades into “Next Girl”, which sounds like its coming straight from the delta, containing the best chorus on the album, at least lyrically: “My next girl/will be nothing like my ex-girl.” The rhyming is so basic, but the line is so well-said. Thank you, Black Keys, for saying what we all want to, but can’t.

“Tighten Up” has made it into everyone’s eardrums at this point, with the catchy whistling and upstroke guitars. The main guitar riff will easily get stuck in your head, and the vocals sound gritty as hell. You can tell these guys are just having a lot of fun with their songs. Auerbach sounds like a classic, broken blues-man, while Carney keeps the rhythm water tight. And the song’s finale is about as crunchy as granola, though minus the sleepy hippie aspect. “Black Mud” sounds exactly like the title. I have never wanted to live in the south (and trust me, I’ve visited), but this song makes me feel like revving a pick up truck, in the mud, while drinking a beer might be a pretty solid idea. The short instrumental interlude leads into “The Only One”, where the melody reverts from bluesy guitars to heavenly keyboards. This five-minute love epic shows how much the band can really mix it up with their strange melodies that remind one of a creepy Doors track.

“Ten Cent Pistol” is something out of a film noir movie set in the ’40s. The only thing missing is a hard-boiled narration from a detective who’s lost his dignity. It’s fitting because the story that is being described could easily have been a movie of this genre, as they discuss a woman beating a man over the head with a 10 cent pistol. “I’m Not the One” is an emotional and heartfelt blues piece, with spacey guitar and drums that never get above the level of climatic, even at the pinnacle of the song while Carney smashes his toms with a bit of misplaced fury. “These Days” closes the record, with its eerie background that undercut the smooth guitar and soft vocals. “Got to change my ways/wasted times/broken dreams/violent colors so obscene,” Auerbach calls out over the soft instrumentation. Sounds like the days he’s referring to are right in tune with what most of us are experiencing.

The Black Keys are going to be remembered as one of the bands in this time that brought rock back to the basics. (That is if Jack White wishes to share that accolade.) Their songs are well written, their instrumentation is spot-on, and it’s music that comes from two dudes who clearly know what they are doing. Brothers stands proudly with Plastic Beach, Contra, and This is Happening as a release that lets people realize modern day music is something we can worship once again. Each release has its share of reasons. On its own, however, Brothers is what we want out of rock music: brilliance and individuality. Thanks, boys.