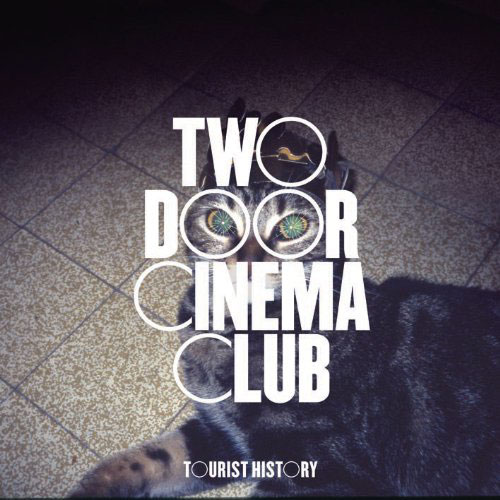 POP! Tourist History popped up on my radar and found its way into my speakers. Out comes a violent burst of indie, generating a handful of different common styles, genres, and references that creates a whole that eschews originality. Still, this album is one of the more interesting debuts of 2010 because of one peculiar disclosure: An unoriginal album can still fill out an important gap.

Electropop and indie rock clashes ferociously under Northern Ireland’s Two Door Cinema Club. These three young lads (although there’s four of them live) have got the fast pace and energetic drive most dance-punk bands wish they could muster, melodies so sticky Spider-man would find them icky, an exemplary set of atmospherically resounding post-punk guitar work and lyrics that a young Kele Okereke certainly wouldn’t have waved off. The finished product packs enough punch to spread like wildfire among the young indie folk and the cross-over beginners of indie, and this is indeed exactly what is happening with the band right now.

Phoenix isn’t such a bad starting reference. They’ve toured with and opened for them, and they share Philippe Zdar as a production co-worker. If you listen to “Do You Want It All?”, you could hear sweet, soaring melodies that both Phoenix and Passion Pit have made great use of. If you listen to opener “Cigarettes In The Theatre”, you instantly think of Bloc Party’s emotional and complex indie rock, but as the epic release kicks in, you’d also like to think of Editors’ heavy use of layers of guitars to raise the roof and expand the soundscape. For example, the all-in burst that is the latter half of “Eat That Up, It’s Good For You” could easily have come straight off of A Weekend In The City or An End Has A Start.

A mere 32 minutes, Tourist History lacks any dead moments, recalling Late Of The Pier’s Fantasy Black Channel and Friendly Fire’s self-titled album if those had been focusing on making sheer pop in place of instrumental experimentation and eclectic variation. It’s an excellent party-starter or anthem to the night out, and Two Door Cinema Club follows the indie trend of matching the danceable electrorock beats, the punky straight-forwardness, and the massive synth and guitar riffing with melancholy in the melodies and youthful, street-smart wisdom in the lyrics. No less than two more acts instantly pop up in my head: The Temper Trap and The Big Pink. This band’s biggest weakness is that they sound like they’re borrowing from all over the place. Bombay Bicycle Club. Foals. One is tempted to keep namedropping forever.

Yet, their biggest weakness is not necessarily their most severe weakness. The thing with Tourist History is that among many other contemporary hip indie band debut albums, it is the most poppy, catchy, and summery of them all.The album has got so many glistening hooks it’s impossible for it to not get stuck with obvious references. Most of all, it’s impossible as a listener to not get hooked. Such a well produced, balanced, strong, confident, consistent indie pop album has, as a matter of fact, not yet been delivered. Tourist History scratches an itch that no other album can. No matter how unoriginal it may be, it is scarily enjoyable, addictive and… irresistible. Simply put: Two Door Cinema Club just makes this kind of music so much darn better than anyone else right now.