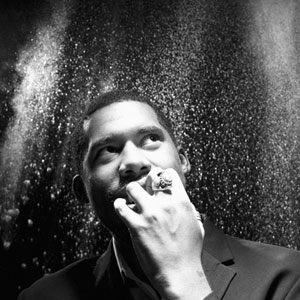 To wax ecstatic about Flying Lotus and the fantastic work of art that Cosmogramma would simply seem like bandwagon jumping at this point, which I fully am. I will, though, leave it at this: the most exciting, challenging and fulfilling art should feel uncomfortable. It should pull you out of your comfort zone, be difficult to describe why it is good and force you to reconsider what you like about art in the first place. Cosmogramma is this album for me, reminding me of the first time I hear Milk-Eyed Mender or …Endtroducing. But enjoying the San Fernando Valley native through headphones is one thing. Was I ready to get out of my comfort zone and experience a sold-out record release party in Echo Park? Short answer: No, not really.

Fortunately for Flying Lotus, a rather large group of people were ready for a FlyLo show. Maybe too ready. Like the mildly true stereotype about my home, Los Angeles can be a bit fake. A sold-out hot ticketed show like this one will always bring out that contingent, but usually the artist isn’t so conspicuously difficult as Flying Lotus. Before I arrived to the venue, I couldn’t tell you what kind of crowd I imagined would show up to a Flying Lotus show, but I was pretty sure I could spot someone who shouldn’t be there. But in actuality, it appears there is no prototypical Flying Lotus fan. People from all races were well represented, as well as some people who identify closer with caricatures and stereotypes than with their cultures. Dread-locked blunt rollers? Check. Fifty-something raver hippies? Check. Girl in high-heels and a five hundred dollar dress complaining to her boyfriend about the bass volume? Check. Basically it was like a tiny xerox of Coachella.

The spin on this night was that it would not be a regular Flying Lotus show, as it was the first of two sold-out nights at the Echoplex in honor of the new album. The second night was billed as the infinity sign, which is what Flying Lotus is calling his new band that debuted then, but this night featured an original visual presentation to accompany the performance. The entire event, in actuality, was notable for the interactivity involved. The t-shirt both allowed you to design your own FlyLo tee. (Are you sick of the term FlyLo yet? Well, if you knew how many times I had to fucking hear it on Friday, you would understand why I am going to play this sucker out until it disappears forever.) There was also an artist who drew a pirate guy in squiggles that was pretty cool to watch done in front of you, in real time. But most importantly, there were the visuals on the bill, which consisted of trippy planets and static and colors and shapes, pleasing the drug crowd (50% of attendees, give or take) to no end. The neatest thing, though, was that the visuals extended to the outside smoking area, where they projected a moon image onto a neighboring building. The details were all covered and the concept was successful in that it drew you in to FlyLo’s strange universe, if only for the night.

As for the actual music, I have to first admit my limited knowledge in electronic and hip hop, the two primary genres that DJs are key. So for me, it wasn’t obvious ahead of time which of the two Flying Lotus would turn to to make his headphone music into an entertaining live show. But, he didn’t really need to choose just one. The beats were hip hop, inspiring head bobbing and dancing in place rather than the full-room freak outs that raves can cause. But, the visuals and lighting were more techno (do people still call it that?), looking to inspire fantastic drug experiences or at least help you relive some memories of fantastic drug experiences. Unfortunately, this blending of styles brought a general unpleasantness to the audience, who lacked the politeness and common courtesy that are  prevalent at indie shows. Flying Lotus, though, did bring excitement to his performance, giving loads of energy to his laptop musical work while dancing and just seeming generally happy to be there. But I can’t really say it was a lot of fun, with the understanding that I just prefer seeing bands and don’t have the appreciation of knowing what a good DJ is doing that is so special. Plus, Flying Lotus is really solitary music for me. I have a hard time trying to dance or pretending to be grooving on something that is more introspective. I don’t discount that some people there are genuinely moved to groove to his art, but the phoniness of it all in general was a turn-off.

One of the opening sets was performed by a gentleman known as Ras G, who is also part of the Brainfeeder crew with Flying Lotus. If FlyLo is your thing, well Ras G is even weirder with more laser shots and spaceship blast offs, yet somehow more danceable. Maybe I just liked him because his bass was so loud (the drunk girl had a point) that it blew out the sound system for a few minutes, in which time he commented that he smelled weed, asked for some and proceeded to smoke a blunt on stage. While this was not that surprising (though I was surprised anyone understood what he wanted through his stoned English dialect), what occurred next was. The night’s previous DJ came on stage and announced that while Ras G was allowed to get high and getting high is great, please do not get high in the Echoplex, because he and a few kids were just told to leave. Oh those L.A. kids,  too old to be sober, too young to discretely do coke in the bathroom.