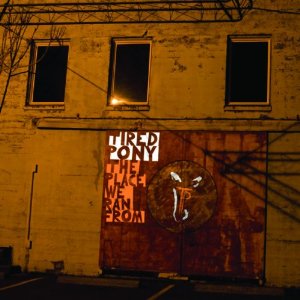 Free Poney, the brand new super group featuring Snow Patrol singer Gary Lightbody, R.E.M. guitarist Peter Hook Buck, and Belle and Sebastian drummer Richard Colburn, has announced plans for its debut full-length. It will be titled The Place We Ran From and is due for UK release on July 12th (a US release has not yet been announced).

Plus, with names like Lightbody, Buck, and Colburn involved, it’s not surprising to learn that the collective has tapped a few equally high-profile guest contributors, such as She & Him’s Zooey Deschanel and Editors frontman Tom Smith (via TwentyFourBit). What’s more, the legendary Garret “Jacknife” Lee handled the album’s production.

The end result is said to be a Wilco, Calexico, and Lambchop-influenced, country concept album or, as Lightbody told BBC, a “twisted love letter to the States”.

To your right, you will find the album’s artwork. You can watch a video of the band recording The Place We Ran From as well preview some of the sounds of the album on tiredponey.com.