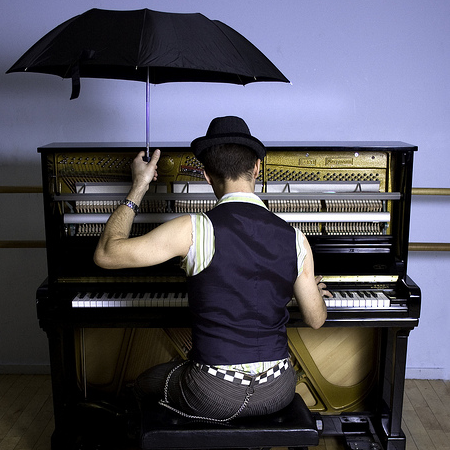 Jeffery Straker is a Canadian singer-songwriter, raised in Saskatchewan by a church organist and an auctioneer. Practicing the piano from the age of six earned him a degree from Englands Trinity College of Music, and drawing from the storytellers he heard growing up, he began developing his song writing skills in the ’00s. It’s safe to say he’s matured into quite the songwriter, as he was the national finalist in the Canadian Radiostar Songwriting Competition, a top 20 finalist in the 2009 Global Unisong Competition, and a top 10 finalist in the US Mountain Stage Newsong contest.

Citing Elton John, Beethoven and Joni Mitchell as his major influences, Strakers latest release, Step Right Up, will be his third recording and the first to be distributed by a major label. It just might be his breakthrough effort, too. This year sees his music reaching out to fans on both CBC Radio 1 and CBC Radios Canada Live, and recently he hit the road with the Regina Symphony Chamber Players. Fortunately, I caught up with him before he set out earlier this month.

Your bio describes your music along the lines of Rufus Wainwright and kd lang. Have these artists influenced you in any way, and why?

It was a reviewer who made that comment actually. But he didnt say I sounded like them. Rather he thought that, like them, Im making music that is essential and beautiful (his words, not mine!). My main influences are Elton John and Ben Folds, but even more so, Joni Mitchell. I have all Jonis stuff and listen to her a lot. I think its her strong story telling. I grew up surrounded by storytellers; in a rural Canadian farming community, population 250. Ben showed me I could do well as a solo piano performer and I love Elton for his showmanship.

What music or artists do you currently listen to and why?

Right now Im listening to Regina Spektor. Her vocal timbre is simply beautiful and her economy with words, superb. I respect her as a song writer because she can say things in a simple way, and in a way no one else would. Im also listening to a lot of Hawksley Workman and Duke Special, whos hugely popular in Northern Ireland, but Ive yet to meet anyone in Canada whos heard of him.

The whole Hypnotized video was made possible by Craigslist. All the cast came from Craigslist and the piano used in the video was donated from a person on Craigslist. The video was pretty inexpensive to make but it was weird how it all came together. It was even weirder when the video wound up on Much More Musics Top 10. I loved going to the fair as a kid, but no I never worked in the circus.

Having performed in places like Ireland, China, and New York, you must have plenty of road stories. But Id like to hear about the show in Panama where you performed in a cathedral in front of nuns dressed in their habits.

Ha, ha! I forgot about that. I was likely the most amused and wished I had a video camera strapped to my head to capture the habits bopping in time with the kick drum. I once did a concert in Saskatchewan that was staged in a monastery and the monks were the most welcoming people. But now Im making myself sound really religious! Panama was a really fun night. The performance was set up by the Canadian Embassy and the church let us use their space for free.

I also hear you stayed at Los Angeles Alta Cienega Motel in room 32, the same room Jim Morrison of the Doors stayed in the late 60s. With the release of the new Doors documentary film, When Youre Strange, perhaps you can tell me what the Doors mean to you and why you stayed in Morrisons motel room.

Id heard about Doors fans making the pilgrimage to check out this motel. So when I was in L.A., I had to check it out too. The woman who runs the motel was more than happy to show the room to me and once I saw it, I just had to stay in it! It was spooky but the graffiti all over the walls did lend certain (ahem) charm to the place. The motel lady told me it was even the same bed that Morrison used. I was freaked out by that, and the bed was really uncomfortable so it just may have been! The giant charcoal drawing of Jim was the best. I took photos that can be seen on my website as well as my Facebook and MySpace sites. The reason I was in L.A. at the time was because I was recording my latest record. Being in the motel room enabled me to tap into the Morrison vibe. I like him and the Doors, so I hope some of their charm rubbed off.

I got asked by the venue to do the gig. The booker came to a show of mine a few years ago, messaged me afterward to tell me he really liked it. Lo and behold, when the Village People needed an opener, the booker came calling. It was fun. The Village People are awesome guys. Theyre really good showmen who strike a chord with the audience. They even let me wear their head-dress in the green room where group photos were taken of us.

Your image reminds me of Tom Waits. Are you a fan of Waits, and have you been compared to him before?

Im definitely a fan of Tom Waits. I love Heart of Saturday Night. But I only discovered Waits a few years ago actually, so my image was not patterned after him at all. Many people have commented on the similarity, but I think its my choice in hat that does it.

Are you happy with your career so far?

Ive been able to make a living playing music for the last four years and Im very happy about that. And it seems to be only getting better and better. More people are hearing the music, the shows are getting bigger and the collaborative work, more interesting. Im always writing so Im looking forward to the next album and what songs come together for it.

Commencing on May 3rd, you go on tour with the Regina Symphony Orchestra. How did this come about; have you worked with orchestras before and what can the audience expect at these shows?

This will be my first orchestra gig and it fulfills a childhood dream of mine. Were playing all my music, which has been orchestrated for nine shows. We began rehearsals last night and it sounds amazing. I got to handpick all the arrangers and each song has a different one. The objective was to make the orchestra an integral part of the songs versus being just a backing band. And weve succeeded at this. Its a really expensive undertaking but supported by a grant from the Saskatchewan Arts Board, where the Regina Symphony is, and where I live half the time. The shows will be pop concerts with me, my band and the orchestra.