Report: Kings of Leon, My Morning Jacket, Al Green for Outside Lands ’10 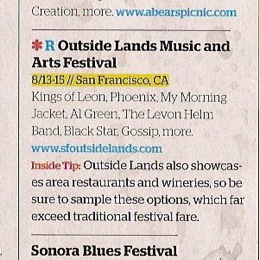 Lineup announcements can a tricky thing. Do your standard, let’s-post-at-midnight reveal and a festival has the potential of being lost in the shuffle of the 1,100 other festival announcing their lineups on that same day. Do too much and the announcement can leave people turned off, even bitter, especially when the lineup isn’t actually worth the fanfare.

So far, we’ve seen one festival use a word puzzle to unveil its 2010 bill. Another held us hostage at our computers for a good 12 hours. A third just made no attempt of fixing its leaky faucet. For this year’s Outside Lands Music Festival, the San Francisco based event has been giving hints about its 2010 lineup via its Twitter account. It also apparently gave a copy of that lineup to Relix Magazine, which published a selection of OSL 10’s scheduled acts in this month’s issue.

So even though this year’s bill isn’t set to be unveiled until June 1st, we already know the following: Kings of Leon, My Morning Jacket, Phoenix, Al Green, The Levon Helm Band, Black Star, and Gossip will be appearing at San Francisco’s Golden Gate Park between August 14th and 15th.

As mentioned all will officially be known on June 1st. Tickets will also be available on that date.