Connan Mockasin – Please Turn Me into The Snat 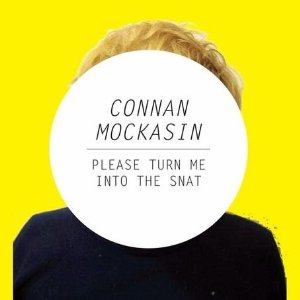 I find it hilariously convenient that I begin writing a review of Connan Mockasin’s Please Turn Me into the Snat almost immediately following a three-day trip to Amsterdam, a weekend filled with hazy days and confusing nights. Though I barely touched mind altering substances, the city itself is very disorienting, with its winding canals, bike paths, tram lines, and car lanes, all which seem to operate in complete independence of one-another. There appears to be little order in the city’s planning, but, paradoxically, everybody who resides there seems to understand the infrastructure perfectly well. Bikes zoom by in between trams, which share lanes with buses and cars, while high and drunk people wander and stumble in between. It’s a miracle these fools make it back alive to tell their friends about their misadventures. In combination with the substances, Amsterdam invites its residents and tourists to enjoy, the place is a bit mind-bending to say the least. And that’s not even considering the city’s red light district at nighttime. But let’s leave that for another discussion.

Connan Hosford, a native of New Zealand currently residing the UK, must be familiar with similar disorienting feelings. In fact, like the residents of Amsterdam, he must be so comfortable with confusion that he’s come to accept it, understand its every detail, and adapt to the controlled chaos that faces him. His all consuming, psychedelic acid rock is so well constructed that it feels like a normal, sane human being couldn’t have possibly written it. Like most good things, it simply exists, almost as if it always has. Hosford and the rest of Connan Mockasin know just how to build a maze of jangling electric tones, swirling synths, chugging basslines, fluttering swells, bending riffs, frenetic percussion, and ethereal helium breath vocals.

Connan may not be the Walrus, but he could certainly pass for it, as he roots his sound in Magical Mystery Tour high-pitched vocals, incandescent voices that float atop waves of tranquil electric wanderings. If Madlib decided to introduce Quasimoto to Feelies, 13th Floor Elevators, The Beatles, Smiley Smile era Beach Boys, and Mew’s most recent album (most of whom he may already be quite familiar with anyways), it might sound something like this crazy record. It rocks back and forth like a crib shrouded in swirls of the prettiest of colors. Notes seem to bend and weave effortlessly as they sink into the dark abyss of confusion that Connan Mockasin makes its comfortable home.

The thing begins with the click clacking of “Megumi The Milky Way Above”, before a child-like squeak shouts “HELLO, CONNAN!” and a lush strum invites delicate, but frantic snares, and Hosford’s signature heliumed pipes. Hello, Connan indeed.  From there, the thing just sort of happens. It oscillates between demented pop, inexplicably dark psychedelic jams, cloudy interludes, and the like. It never bores, because it is constantly mutating.

Not since Battles’ Mirrored has a record twisted and turned with such manic elegance. It seems to be onto something steady, before Hosford plucks or shakes his way into yet another dark alleyway. There is no telling where you will end up on Please Turn Me into the Snat, but when you get there, you’ll be pretty content. With each subsequent listen, you’ll find you’ve arrived somewhere new. But best is that the record’s disarray doesn’t slap you in the face, but holds your hand until you’re comfortable, and then lets you wander around on your own. There’s always something nice and pleasant preceding anything too difficult or off-putting. Whenever it feels like you’ll never find your way back, Connan’s vocals start singing incomprehensible words and he gives you some semi-catchy melody or set of notes to latch onto. You won’t be hanging on for dear life, though, because it’s calm waters we’re on.

Take the record’s centerpiece, the sprawling “Forever Dolphin Love”, which almost feels like a one-song version of the entire record. Click-clacking its way to sinking tones, it creeps in slowly, builds itself into some form of a pop song, and then wanders about, before arriving back to some semblance of accessibility.

Above all, Connan Mockasin’s Please Turn Me into The Snat is a reminder that psychedelic rock is rooted in purposeful confusion. Though many bands tend to bring psychedelia into their well-constructed, perfectly manicured, soundly structured songs, they tend to forget that psychedelic rock is supposed to transport the listener to a world of little rationale. Connan Hosford has not forgotten this, even if he’s forgotten everything else. Not in a long while has a record felt so utterly free to explore the inner workings of its songs and perfectly constructed simultaneously. Though the record curves and winds like the crazy city I just visited, it does so with a deceivingly high level of self-awareness and understanding of what makes a great album great. It flows seamlessly, and never once allows for you to become uninterested in its expansiveness. At the top of the map my Amsterdam Hostel gave me it said “Let us help you get lost.” If you do need help getting lost, Please Turn Me Into the Snat is just what you weren’t searching for. After 36 minutes, you’ll leave with little understanding of what Connan Mockasin is trying to say or what “the snat” is. Come record’s end, all you’ll know is that if Connan has yet to be turned into it, you don’t want to know what the transformation will look like. On second thought, you absolutely do.