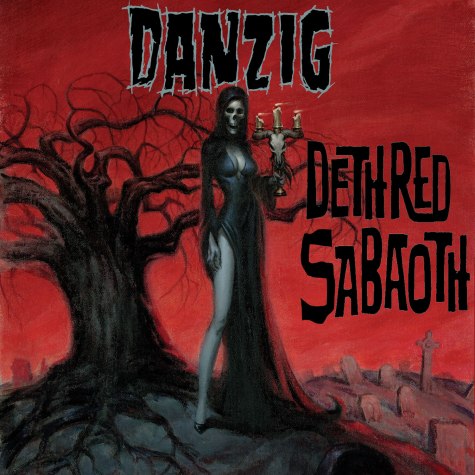 For me, The Misfits are like my first true love; everything about them is perfect and nothing can replace them (even if I didn’t stumble upon the band until some 16 years after they broke up). Danzig, on the other hand, is like that new girlfriend where you want everything to work out, but you just can’t seem to get past her imperfections. Deth Red Sabaoth demonstrates this concept painfully well.

Glenn Danzig’s voice, the demonic Elvis impersonation that it is, and his campy, faux-Satanic lyrical content informed a lot of my musical upbringing. I loved it because I got it slammed in my face in two or three-minute increments in Misfits’ songs. Having to deal with it in seven-minute epics (the overly dramatic and laughably morose “Pyre of Souls: Seasons of Pain”) sucks every iota of charm right out. Progressively, Danzig’s subject matter has become more serious and less B-movie-esque. But on this new album, it’s taken an Anne Rice turn for the worse (despite the seek-and-destroy fun of the guitar, “Hammer of the Gods” sees the band fall into the worst kind of self-parody).

What’s truly frightening is that he made this record despite his backing band. With the returning Tommy Victor, plus Type O Negative drummer Johnny Kelly and former Samhain bassist Steve Zing, Danzig had the makings of a band with serious ties to some intensely powerful metal, and yet he failed to diversify or spark any kind of growth, stifling three powerful forces with a lot of varied experience to offer. The problem with many of these songs is they break down into big swirls of furious guitar that play out like some blues-inspired meltdown, and these musical explosions are neither inspired nor free of form, often feeling rigid. For Danzig, the focus of integrating blues is all about big freak-outs without innovation. I guess that’s what you get for Glenn Danzig taking lead on so many fronts during the album’s recording.

It’s not all bad, despite what’s actually good being rather minimal. “Black Candy” sees Danzig’s voice return to those ancient chords of demonic goodness in a song that feels, well, like a real jam, with big, menacing drums, a pained guitar, and some subject matter that is only thinly veiled at worst. “On A Wicked Night” is the one song on the album where the whole “Hey, let’s use old Kustom bass amps from the ’70s and play all the guitar parts in them to create a vintage, heavy vibe” actually comes out. And with the strummy, nigh-Pagan sacrificial ceremony vibe going on, it doesn’t feel like something old and comfortable, making it stand out from the rest of the album.

For whatever reason, Glenn Danzig has this inability to veer off his intended course and just have fun. He’s spent the better part of his entire career washing away his groundbreaking work with The Misfits, and after so many albums of the same gloom and doom and total phony artistry, you just want it to stop. There’s so much serious metal out there, with big, world-annihilating guitars and melodies, stuff infused with grimy, dark blues, and truly rocking solos. However, there is no real Danzig out there. And after two-plus decades, it’s clear the honeymoon is over for good.