Eli "Paperboy" Reed – Come and Get It 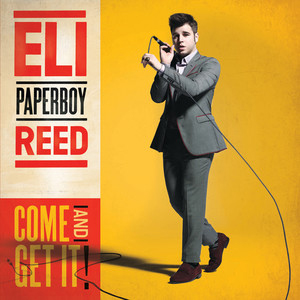 The last decade has seen the resurgence of a sound in American music long thought lost: soul. I’m not talking about the neo-soul movement that produced some gems like Maxwell and Angie Stone (but also gave us Macy Gray). I’m talking about soul music. Hints were seen in the mid ’90s with bands like Knoxville, TN’s Gran Torino.  However, recent years have seen the rise of Brooklyn’s Daptone Label and its roster of new talent along with the Numero Group’s mining operation in Chicago unearthing long lost gems. The Ubiquity and Now Again/Stones Throw labels from California perform a combination of the then and now, and along with many independent outfits indicate soul music is making a comeback; though, this time it looks to be a bit more permanent. Sharon Jones, along with her Dap-Kings, is often described as the flagship of the movement, but there are others such as Milwaukee’s Kings Go Forth, or Austin, Texas’ Black Joe Lewis and the Honeybears, whose contributions remind us of the various flavors that go into honest and true soul music. Boston’s contribution is Eli “Paperboy” Reed. Along with his band the True Loves, Reed is a great example of what is right in this movement.

Reed’s music is most easily grouped in with northern soul, a style of music rooted in the lesser known, non-mainstream Motown/Tamla recordings of the early to mid-’60s and popularized by British DJs in the dancehalls of Northern Britain.  However, to simply write him off as such would do him and the music a disservice. After graduating high school, Reed spent nine months in Mississippi and a little over a year in Chicago before returning to Boston. In those 21 months, however, Reed learned and absorbed everything he could about the music he loved, but more importantly he seemed to understand it. Reed’s musical education has allowed him to fuse various elements of Chicago soul, and the more Tamla-styled recordings of Northern Soul with the pain and honesty found in the Delta Blues. His music is often up tempo and finger snappy even when his lyrics drip sadness and heartache (like good soul music should!) It’s this mindset and focus that allows Reed to convey his art with authenticity and sincerity with no worries of shenanigans being called (i.e. the Bravery).

If you were to read any review of Eli Reed, for this album or any other, it invariably will name drop Otis Redding and Wilson Pickett. Marvin Gaye gets lumped in as well, and if you’re really lucky Sam Cooke gets a mention. Yes, these men are most certainly an influence on Reed, but only peripherally. The influences demonstrated with Reed’s music are linked far more with his production and style of arrangements than actual vocal homogeny to soul giants.  Reed’s voice is too sweet for the gut wrenching wails of the Reddings and Picketts of the genre, and not sweet enough to sit with Gaye or Cooke. (I blame the horns for leading people astray.) With a Memphis Horn-like sound swallowing you whole on many of Reed’s songs, it’s easy to get all caught up in the Stax/FAME sound and neglect the influence of Chicago soul, and the style and sound developed by Carl Davis while he was running Okeh Records. That is easily corrected with the opening track, “Young Girl”.

Reed opens Come and Get It with “Young Girl”, a cover by obscure Boston soul man Frank Lynch.  If there was one song that I could think of that jumped to my mind after hearing this track it was Tyrone Davis’ “Can I Change My Mind”. The rolling horn intro of Davis’ piece is somewhat paralleled with Reed’s Lynch cover. The argument that this song is not an original to explain away the similarity is easily dismissed with the remainder of the album – all penned by Reed. Reed knows his music and his music’s history.

As the album progresses, tracks like “Name Calling” and “Help Me” show an affinity to the post-Motown era of Holland-Dozier-Holland, and their Hot Wax Records merging a slick production sound with a harder pop feel, shedding the sweetness of Motown.

“Pick a Number” follows Gamble and Huff’s playbook using a lush vocal harmony invoking the Ebony’s for the chorus, but falling back on the more direct storytelling ethos of a decade earlier for the body of work.

“You Can Run On” takes us back even further to the more rockabilly influenced jangly sound found with artists like the Everly Brothers, Carl Perkins, or even Creedence Clearwater Revival’s shack stomping tracks like “Looking Out My Backdoor”.

The final track “Explosion” is this album’s “(Doin’ the) Boom Boom” (Reed’s soul stomper from 2008’s Roll With You), and represents the hot dance house sounds of soul stompers International Kansas City Playboys, or the more contemporary King Khan and the Shrines, or Black Joe Lewis and the Honeybears. This is as much rock and roll as it is soul. On first listen, the song almost feels out of place, especially coming after the lush words of wisdom on “Pick Your Battles”.

What begins as a smooth sweet soul album akin to the sounds of Okeh Records, ends with a foot firmly entrenched in the sounds only found rooting the swamps of the Bayou, or the swill joints of Texas. It is this that makes Reed so interesting. Much like his contemporaries in this soul resurgence, Reed channels the creations of the one hit wonders, the lesser known, and the sadly forgotten soul artists far more than he does the superstars of the genre’s past. In doing so, the torch is carried on.