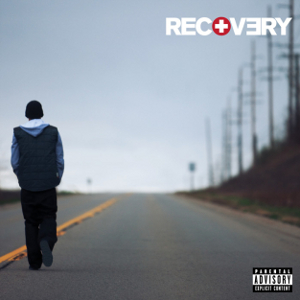 Let’s begin with the accurate words of CoS alum Michael Denslow concerning Eminem‘s previous release, Relapse. “Poor Marshall Mathers. After achieving worldwide fame and critical acclaim for his shocking and crass, yet inventive, earlier albums, he did what would be expected of any rough-around-the-edges artist. He matured, came to terms with his demons, and settled down to make music that reflected a new stage in his life. But that wasn’t enough for us critics and hip-hop heads. We didn’t want watered down lyrics about politics and American culture. We wanted Slim Shady.”

Ask and ye shall receive, Michael, and those for whom he was speaking. Slim’s back to his true form, or at least as close to his true form as we could hope for at this stage in his career. That raw, angry energy that he seemed to be constantly emitting on 1999’s Slim Shady LP is gone, because that chapter of his life has closed, but he’s making a very solid attempt to draw from that well once again on Recovery, and in a lot of ways, he succeeds. Especially given what a major letdown Relapse ended up being.

It’s no secret that Relapse was a dud and further deviation from that selfsame, absurdly violent and crude persona that made him famous. And it’s not just the opinion of a hoard of critics; Eminem himself fully acknowledges this several times on the album. He admits he was wrong on the  first single, “Not Afraid”. “Let’s be honest, that last Relapse CD was ehhhh/Perhaps I ran them accents into the ground/Relax, I ain’t going back to that now.” He then proceeds to apologize for his error on standout track “Talkin’ 2 Myself”. “This time around it’s different/them last two albums didn’t count/Encore I was on drugs, Relapse I was flushing em out/I’ve come up to make it up to you no more f***ing around/I’ve got something to prove to fans I feel like I let em down/So please accept my apology/I finally feel like I’m back to normal.” He willingly admits that his last attempt was subpar and that something needed fixing.

And let me be the first to say that Eminem fixed whatever was wrong. This is the most vivacious, authentic album he’s made in years. Is it unhealthy that I immediately become nostalgic when I hear that irately filthy voice spew lengthy strings of argumentative obscenities aimed at anyone and everyone? Personally, I think not. For some reason, one of the most endearing things about Mr. Mathers is the fact that he can make you want to vomit, hit somebody, and chuckle all in the span of eight seconds. And that’s something we haven’t seen from him in quite some time, and it feels so good to hear Em doing it again. This whole album just feels so much more natural than his last few releases.

Literally every track on this album sports the old/new mindset Shady has adopted. And while not all of them are showstoppers (“Won’t Back Down” (feat. Pink) and “W.T.P.” are lethargy-inducing sleepers), the majority of them are going to have you rough and riled within seconds of hearing them. With catchy hooks, choruses, and beats multiplied by the endless pool of wit and anger that Eminem possesses, this is a tough release to ignore. You’re going to hear a lot of these tracks on your local hip-hop station–“Not Afraid”, “No Love” (feat. Lil’ Wayne), and particularly “Love The Way You Lie” (Feat. Rihanna)–but that doesn’t mean these tracks are worthless. “Love The Way You Lie” is an extremely raw, emotional track about relationships, specifically infidelity/abuse, which is very gripping given the brush Rihanna had with love lost due to abuse. “No Love” (feat. Lil’ Wayne) is an instant hip-hop darling, first because this is a collaboration between two of the hottest MCs in the game, and second because it’s a solid piece. It samples Haddaway’s “What Is Love”, more commonly known as the song that Will Ferrell and Chris Kattan loved to bob their heads to on SNL, and seamlessly uses the sample and the chorus to produce an extremely impressive and highly listenable piece.

However, the sad truth of the matter is this: many of these tracks won’t receive considerable radio airplay simply because they’re too obscene or thematic to put on the air, but that’s no reason not to listen to/love them. Truly, these are some of the best tracks I’ve heard Em spit since The Eminem Show. “25 To Life”, “Seduction”, “Almost Famous”, and “You’re Never Over” are all songs that will fall under this category. The real grit that Eminem hoped for resides in these tracks that won’t receive airplay, and those are the ones that are the most important to hear, because those are the songs that he wants to emote to his listeners.

Simply put, true Eminem fans will love this album. Real, raw, and raging, this is the Eminem we all fell in love with so many years ago. The title of the album says it all. The aptly named Recovery admits the misstep that was Relapse and gives us all hope for the future of Eminem, which was looking somewhat bleak before this release.