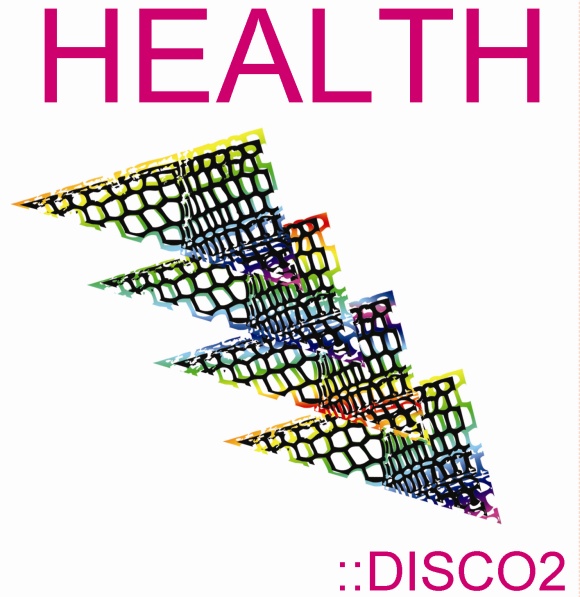 HEALTH was a great band to have witnessed live as an opener for Nine Inch Nails during 2008’s Lights Over North America Tour. While not so well-received by the locals of Daughtry-infatuated North Carolina, HEALTH made one hell of an impact on me, as a then-relative “noob” to noise rock. Technical difficulties and unnecessary heckling from drunken rednecks did not dissuade this group of Californian synth slaughterers and hard rockers from pushing forward with suave attitude and LEDs aplenty.

One does not so much listen to a HEALTH album as they either become completely immersed into or utterly alienated by it. This music, in its original version and context, is an acquired taste of atmospherics, punk rock, and “Radiohead + Will It Blend? + hot pink”. The remixes present on DISCO2 are no different — a breakdown and reconstruction of Get Color‘s genetic code, filling in holes with more trance and house elements than an LSD-induced Barney on a Jurassic Park/Plastic Beach tour package.

The one brand new, unaltered track present by HEALTH, the opener “USA Boys”, lets you know immediately what to expect: no-nonsense synths and cool devices merging and mixing amongst one another in a psychedelic arrhythmia of colors, shapes, and quasi-sound. Even when a base track makes repeat appearances, no two songs sound alike on any level besides being the equivalent of techno saccharin shots to the imagination – “Nice Girls” and “Die Slow” each get two takes (Blondes & Little Loud, Tobacco & Pictureplane respectively), while “Before Tigers” trumps all with a trifecta from CFCF, Gold Panda (whose track is the only real interruption in an otherwise fluid release), and Blindoldfreak.

A singular, proper means to review this record — other than dissecting every involved artist’s career one by one – is to recommend you listen of your own accord. I cannot, in good conscience, tell you this is the most positive dance record you will hear in ages, because this genre (and its numerous relatives) encompass such a wide margin of devotees and practitioners. The few vocals on DISCO2 are haunting and illegible, like ghosts speaking from beyond the dance floor graveyard; some tracks echo Gorillaz heavily (“Severin [Small Black Rmx]”), while others are formulaic and, nonetheless, addictive as cigarettes and porn, period. The repetition and occasional monotony toward the end may come off somewhat trying, but only if you are not rotating this on a digital turntable.

Everything touched upon in DISCO2 is a dance party or a sex scene in and of itself; every track’s sculptor is an homage to both the nightlife and HEALTH, with room for breath only toward the tapering tail-end, which seems unexpected — as if this album was meant to play forever, the ’00s Moog clone of Bette Midler’s “I Put A Spell On You” from Hocus Pocus. I am not terribly familiar with the techno scene, and the only name on this record I recognized immediately was Tobacco, but if DISCO2 was meant as an intro to house or dance rock (minus silly vocal defecation like 3OH!3), I was sold from the get-go all too easily, because when you are driving to the mountains at three a.m. and still dancing (“USA Boys”), grooving (“Before Tigers [CFCF Rmx]”), or even staring lazily at the passing streetlights, imagining them pulsating to the beat (“Nice Girls [Blondes Rmx]”)…you know they’ve done something right.

It’s a tragedy that we lost DJ AM so soon, I’m betting TRV$ and him could have torn the house down with this piece of neon gold.