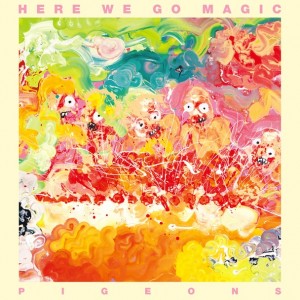 For as much as I’ve heard about Here We Go Magic, I managed to remain ignorant as to what they actually sounded like until I put Pigeons on for the first time. It’s pretty hard to bring this kind of blank slate to most reviews. Even without a frame of reference for the band’s style, I still knew who they had previously toured with and that their first album was generally enjoyed. But, after three listens to the new album, I had to go back and hear their self-titled debut. Unfortunately, this desire wasn’t to satiate a new appetite for their brand of psych-rock that is majorly indebted to Animal Collective and Bradford Cox’s projects, but to understand where the hype for this band came from. Hell, I was willing to go back to front man Luke Temple’s solo albums to get it, but it turns out my procrastination in listening to Here We Go Magic just means I got to the party late, right at the beginning of the sophomore slump.

Whereas the first album was definitely weird, Temple’s ability as a singer/songwriter was the centerpiece to play around in dream psychedelia, even sounding like a full-band/ “chill wave” project, released back when we were still using that term on an hourly basis. And though I vowed to not consider “sounds like Animal Collective” as a flaw until 2011, there is a difference between the first album’s AC-influence and the second album’s AC-reliance. Pigeons feels like someone who is given a straight A report card, but doesn’t pay attention to what the reasons for the good grades were. The effort is supposedly the product of a creative overflow that occurred in the group, but the creativity is mostly a redundancy on other bands’ creative spurts.

Odds are that you have heard lead single “Collector” by now. And, though it is infectious enough and will have the teenagers bouncing around at parties, it seems to revel in novelty 80’s music (and Of Montreal) that is hardly worth revisiting, namely The Vapors “I Think I’m Turning Japanese”. The album’s other noticeably catchy and upbeat future single, “Old World United”, also lowers the band’s previously mature taste-level (and I swear I’ve heard this melody before but cannot place it). The track falters because of thin vocals from Temple that seem like they didn’t get the post-production treatment that Pigeons holds throughout. Completing the trinity of intended focal points is “Casual”, a song that answers the question “I wonder what an Animal Collective cover of ‘Smooth Operator’ would sound like?” Turns out, it wouldn’t be that great.

Sometimes music that sounds as familiar as these songs do means that the songwriter has found a great melody. On Pigeons, it seems more like the songwriter is mining the past. Though none are blatant  rip-offs, they are too indebted to other groups to sound original. Temple is now a seasoned songwriter and he would be hard-pressed to record an entire album without stumbling on something interesting, maybe even something that resonates. And one does appear, found on the most traditional rock songson the record, “Bottom Feeder”. The song takes the scratchy, thin voice that was so problematic on the party jam “Old World United” and applies it to something more timeless, resulting in one of the most beautiful musical moments of the year. Bands like Animal Collective, Deerhunter, and Of Montreal never really have to force an aesthetic, while Here We Go Magic produce apt imitations of the music those bands produce instinctively.  For instance, “Moon” is technically great, but doesn’t know where to go, and “Bottom Feeder” sounds like an entirely different band.

Though you can’t blame Temple for trying to push the songs he writes away from the traditional fare he has been hearing his whole life, there has to be balance. All the bands that I have cited remain accessible and enjoyable on both an innovative level and on an initial ear test. “F.F.A.P.” does this perfectly, starting off like a mild dream trance and morphing into a chaotic nightmare. This song seems to achieve what many of the record’s tracks attempt, and show that the Here We Go Magic aesthetic is successful when pulled off. And, if I had to say one thing about Pigeons, it would be to call it a forgivable misstep, both because its strong points are so strong and because it’s low points are more misguided than bad. Unfortunately, the album is mostly low points, especially the ambient closing that kind of lets the listener drift away rather than just stop. Sure it’s not bad sounding, but I am still always relieved when next album on my iTunes library finally begins.