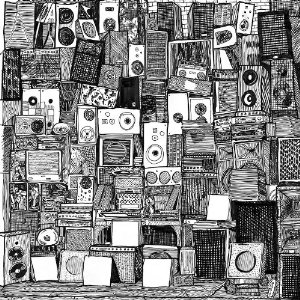 Remember Nada Surf? That band that pops up every few years with a new album and tour; they had that hit song back in the 90’s? Remember?

Well, they’re back again, this time with an all-covers album called, If I Had A Hi-Fi. The covers are mostly from artists you’ve probably never heard of: Bill Fox, Arthur Russell, The Soft Pack, Mecromina, etc. A questionable choice, considering the band is probably hurtin’ to avoid daytime jobs.

But they also put a few recognizable tracks on the list: a Depeche Mode cover of the famous “Enjoy the Silence”, a take on Kate Bush’s “Love and Anger”, and a try at “The Agony of Laffitte” by Spoon. The latter containing a touch of irony, considering Spoon and Nada Surf are bands who started their careers around the same time. The difference is, one of them still puts out great music, and the other seems bound for the county fair circuit.

Take “Enjoy the Silence”, for instance. They strip the track of everything that makes it awesome: the danceable beats, catchy synth lines, the dark vocals, and instead morph it into an alt 90’s sing along, complete with repetitive “ba ba, ba ba, ba ba” chant at the end.

On “Questions”, an anti-Vietnam war number by The Moody Blues, they decide to crank up the distortion and rush through the first piece of the song before slowing it down and adding an orchestra, then switching back to the crunchy punk –style verse. They essentially strip the song of any soulful qualities, glam it up, and reproduce it as a track that no Moody Blues fan will likely appreciate.

It’s not all bad, though. “The Agony of Laffite” has some interesting percussion, and the backing vocals over the chorus give the song added depth. It’s interesting to hear the low-fi acoustic number cranked up and extra-produced. Overall, they do the track justice.

The obscure “You Were So Warm” by Dwight Twilley is a fitting choice for this band. They give it a light-hearted, balmy make over. Lead singer Matthew Caws vocals shine on the track, and if nothing else it makes for a decent addition to a summer playlist.

While Nada Surf won’t be turning out another “Popular” (that one hit song from the ‘90s) anytime soon, they keep plugging along, and the world’s no worse for the wear. Artists create, and sometimes they continue to do so whether or not anyone really cares.