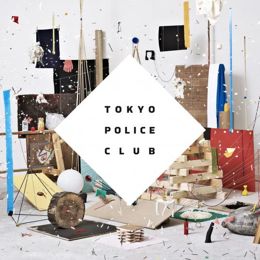 For most bands, it’s the transition from debut to sophomore album that elicits the most fear. But Canadian indie rock foursome Tokyo Police Club like to do things their own way. After their A Lesson in Crime EP, a 16-minute breath of fresh air, they released Elephant Shell; a far more epic and adult record that is enjoyable, but without a lot of the quirky energy from their first EP. Now, just a couple years later, and the boys present us with Champ. Within the 30-minutes-plus record, the band hit all the right notes and even a few new ones.

What was missing in Elephant Shell was that initial connectivity with songs. Tracks like “Centennial” and “Your English Is Good” had it, but a lot of that album went for songs with a deeper appeal than that instant explosion of pure pop joy. It’s the story of a good band; maturity breaths life and depth into the songwriting process. But you wanted your cake and you had to eat it too; Champ is that culinary offering.

“Bambi” particularly is all about brevity and their trademark choral and melodic work. But spun deep into the DNA of this new collection of songs is an ’80s synth dance sensibility, represented by lots of electronica pops and buzzes, and a new found level of cynicism in their lyrics. “Not Sick”, which hums to life with a bright and bubbly keyboard line, speaks of being “Not sensible/I want to marry a dancer/A vegetarian who can’t stand to be wrong/I do I do I do”. It’s got that naivety of something like “Citizens of Tomorrow”, but it’s less intellectual, less of a construct and more realistic from a group of guys emerging into their mid-20s.

“Hands Reversed” also shows the band doesn’t have to blast forth with a lot of energy either; hitting the listener over the head with cymbal crashes and sharp-as-a-tack rhythmic guitar, it’s a subtle track. It’s also a great example of Dave Monks maturing as a vocalist. There’s still his energetic screaming on the album, but he plays with the depths of his range, slowing down and letting the bass in his voice make great back-up for songs about the pains of being your own man.

There’s also lots of playing around with the album. I avoided calling it experimentation because that word has the connotation of being purposeful, of having intent; playing around seems less revolutionary and more like four guys growing organically. The song set “Favorite Food” and “Favorite Colour” are two of the more narrative-esque songs on the album, something akin to a more fleshed out story, as opposed to the other tracks about the feelings associated with an event. “Favorite Food” finds the band playing with notes and tones before breaking down into a song where the music is secondary to the story. They’ve always had catchy lyrics, but between the hand claps and fuzzy guitars, they’ve never put in on display like this. “Favorite Colour” is arguably one of the band’s less exciting songs, but one of their more interesting. It’s without a lot of the nerd-tastic giddiness and is straight forward and steady. It has the vision of a rock anthem, but doesn’t exceed its basement-level reach.

There’s a whole lot to love here, perhaps more than other TPC efforts. Gone are the days, though, where the album is built on an indie pop glean. Sure, if you want them to channel Pat Benatar in “Big Difference” or power through some super spastic sounds, creating a wave of sheer dance-rock energy, in “Wait Up (Boots of Danger”), then you’ll find yourself a happy camper come the album’s end. But if you wanted truly legitimate and incremental growth, if you wanted the musical equivalent of moving out of your parents’ house but still visiting every Sunday, then Champ is your record.