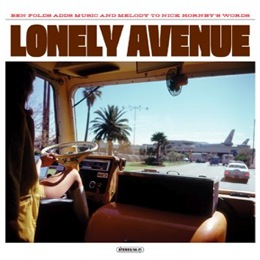 A quick Google search lends that the first mention of a collaboration between piano maestro and The Sing Off judge Ben Folds and acclaimed English novelist Nick Hornby dates all the way back in September of 2008. So needless to say, the duo’s forthcoming album Lonely Avenue is a long time coming. Good thing, at least on paper, it sounds awesome.

Due for release on September 28th via Nonesuch Records, the album features music and vocals by Folds and lyrics by Hornby, with string arrangements by influential pop string arranger Paul Buckmaster (David Bowie, Elton John, Leonard Cohen). Folds recommends that Lonely Avenue be listened to on vinyl and, because of this, he recorded the album on a 2-inch tape and will make it available on audiophile-grade vinyl, cut with the Direct Metal Master process at Abbey Road Studios and pressed at Pallas Manufacturing in Diepholz, Germany. For those non-record playing elite, the effort will also be released on CD, digitally, and in a special deluxe edition that includes four short stories by Hornby.

According to an issued press release, the idea to create an album of “Folds’ unique pop songwriting sensibilities with Hornby’s insightful prose was conceived during a dinner conversation between the two friends one night in 2009. After that, Hornby began regularly emailing lyrics to Folds, who then turned them into Lonely Avenue’s 12 musical short stories.” The end result is said to touch on subject matter ranging from a mother with a child in the hospital over New Years Eve to the work of lyricist Doc Pomus, lyricist of countless ’50s and ’60s pop hits.

Above, you’ll find the album art work. We’ll update you when more information is released.