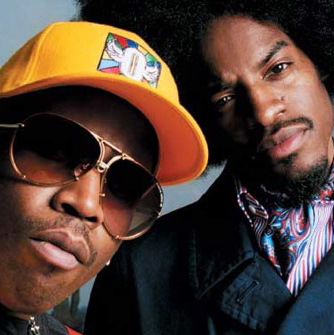 Possum Aloysius Jenkins and Daddy Fat Sax go together like butter on grits. We can all wait for the supposed new Outkast album, or put on Aquemeni and spin “Skew It On The Bar-B” for the x-th time, or pray for a tour. In lieu of all that, we should check this track: “Lookin For Ya”, which may or may not have something to do with Big Boi’s July 6th release Sir Lucious Leftfoot: The Son Of Chico Dusty (via Prefixmag).

Big Boi grabs the first verse, Sleepy Brown the hook, Andre 3000 is on verse two, S.B. breaks it down, and then it’s over as soon as it began. The silky production coupled with old school familiarity makes this track cooler than a polar bear’s toenails. You can download the song below. (via 2dopeboyz). And listen to how tight that snare is.

“Lookin For Ya” does not appear on the official tracklist to Sir Lucious Leftfoot, nor does any other vocal collaboration with Andre 3000 (through Andre did produce “You Ain’t No DJ” and “Daddy Fat Sax”, as stated in previous interviews), so it’s questionable whether the track will see an official release on or alongside Big Boi’s forthcoming album. Though a brief Outkast reunion is something to celebrate, so is the tracklist for Sir Lucious Leftfoot, which features a catalogue of guests including Jamie Foxx, B.o.B., George Clinton, T.I., et cetera. If Kanye bum rushes Big Boi at the grammys…

Update: According to GQ, Andre 3000 will not appear on Sir Lucious Leftfoot due to a contractual clusterfuck between Jive Records and Def Jam records. Big Boi does intend to release “Lookin’ For Ya” and Dre and Boi’s previously leaked collaboration “Royal Flush” because, as Big Boi puts it, “The fans thirst will be quenched. You know, I’m no stranger to that internet, baby. So you already know what time it is. The thirst of the fans will be quenched.”  Maybe these tracks will be available underneath caps of Gatorade?

Check out the GQ interview for more on the label beef, what may be on the new OutKast record, and a lot of fraternal solidarity.

Sir Lucious Leftfoot: The Son Of Chico Dusty is due out July 6th via Jive Records Def Jam Records