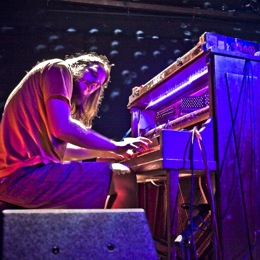 With the title pianist/composer, you’d expect Marco Benevento to be a serious guy; turns out he likes to play with toys. Benevento actually makes music via a process called circuit-bending, in which he alters the wiring of the toy and creates a new sound for it to make. Add in the usual sounds of upright piano and a Casio keyboard, and you get the idea of the types of styles he’s trying to blend. While his new album, Between the Needles and Nightfall, is full of tracks like this, “Greenpoint” is worth special attention.

The track, which Benevento said slowly came together over the course of two years, is something that most people may have a hard time following. But because of its open-ended nature, most listeners should find that it’s a much more thrilling listen that sort of builds up and slows down in an intermittent pattern. There’s a smorgasbord of sounds going on, from the very rich, deep music of a Wurlitzer to the spacey effects of sounds, noises, and bleeps and bloops to the constant rhythmic sounds of cymbals crashing. Despite its grandiose and epic nature, there’s a sort of primitive continuity to the various layers of complicated yet equally energetic instrumentation.

You can check out both “Greenpoint” and its accompanying music video below. Between the Needles and Nightfall is out now on Benevento’s own Royal Potato Family label.