Check Out: New Pearl Jam song, "Of The Earth" 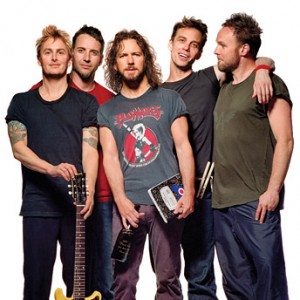 The world sees “new Pearl Jam song” and suddenly everyone can’t wait to stream it until the song is burned into their cerebellums. But as it turns out, we all got a little overly eager and what we really got was an Eddie Vedder solo song for Julia Roberts’ new movie, Eat, Pray, Love. Well, rip that flannel from your closet once again as this time, thanks to some industrious fans, we have an honest to goodness new Pearl Jam song in “Of The Earth” (via Antiquiet.com).

Uploaded by fans from a recent show in Dublin (and by recent, we mean Tuesday, June 22nd), the song was originally created during the self-titled “Avocado” album sessions. While it was re-recorded during the Backspacer sessions, it’s only now up for auditory consumption by people beyond the band and close friends.

Despite all the mystery and hullabaloo, the song’s worth the wait. Unlike “Better Days”, this is a Pearl Jam song; its heavy and agitated guitar work, coupled with some pretty rhythmic pounding behind the kit and Vedder’s shrieking and wailing, burn brilliantly. Throw in a big musical breakdown and you can see why patience truly is a virtue.

Check out the live cut of “Of The Earth” below. The band is on tour in Europe now through July 10th.

Check Out:
“Of The Earth”