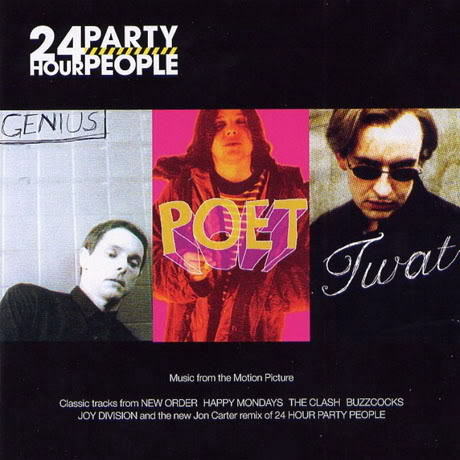 “Nobody knew to go to the sermon on the mound. People just turned up; they knew it was a good gig.”  -Tony Wilson

The first time I ever saw 24 Hour Party People, I had no idea what to expect. Some kids at school just told me it was about ecstasy and raves, so I figured it would make for a good rent during one dull summer vacation. The movie proved to be more than that. Aside from its post-modernist and impressionistic filmmaking style, what shocked me more was that it had old Sex Pistols footage, told me the true story of Joy Division, taught me the history of rave music, and introduced me to the Happy Mondays. 24 Hour Party People documents the high times of Tony Wilson – played to perfection by the always wonderful Steve Coogan – a British television reporter who was so blown away by punk rock, he formed his own record label, club, and scene, only to become the biggest (mis)manager in all of Manchester. Wilson truly was a pretty punk rock guy, because he didn’t give a fuck about trends, press, drawing a crowd, or meeting anybody’s demands but his own. The events depicted in this movie are what Tony Wilson himself would describe as “history.”

Of course, a movie about the Madchester music movement would have to be told with a fantastic soundtrack. There’s no question about it. Director Michael Winterbottom knew he would have to do the music selection justice if to make a film about this crowd of wild and drugged up Brits, not to mention to cast the film impeccably. What is uncanny about this movie though is how much the actors look like the people they are playing. The dude playing Sean Ryder looks pretty damn close to the real Sean Ryder, and this makes the movie bizarrely authentic.

The film starts off with the Happy Mondays classic of the same title as the film. While the song plays, one of the most-difficult-to-read and trippiest title sequences I have ever seen races across the screen. This would be any graphic designer’s day in Hell, but the song and fucked up imagery allow you to brace yourself for what is about to come from this beautiful mess of a film.

One of the best scenes here is when the Sex Pistols arrive in Manchester to play. While the band tears through Iggy Pop’s “No Fun”, Tony Wilson describes the event as history to his boss, who replies, “How can it be history if only 42 people were there?” He makes a good point, but the 42 people there all went on to do great things. Wilson explains in the scene (while a mock-Pistols play in the background, which is crosscut with footage from the actual show) that members of the Buzzcocks, Joy Division/New Order, and various other Manchester musicians are present. Also present is Martin Hannett, the genius who recorded a majority of the bands. All of these people see the Pistols and their lives are changed. Immediately, Pink Floyd and David Bowie become obsolete in the eyes of everyone in the room.

A film about Joy Division could not be complete without multiple performances by Joy Division. Staged performances of songs like “Love Will Tear Us Apart”, “Digital”, and “Transmission” play, while “Transmission” is intercut with remade broadcasts from Wilson’s show on Granada TV. The “Transmission” bit is quite powerful, as one bares witness to how fast things in the UK were changing in the late ’70s. The best scene with Joy Division, however, is not a performance, but a glimpse of them cutting “She’s Lost Control” in the studio. Hannett says some of the best lines of the whole film in this scene. You might question his genius, and his sanity, but you can’t help but marvel at his decision to move Stephen Morris’ drum set to the roof (“We got a rattle in the kid”).

It’s a truly sad scene when Ian Curtis hangs himself. Especially since the scene happens only moments after the band finds out they are going to tour America. Following his death though, begins what Tony Wilson claims to be “the second half.” The second half of the story, film, and Factory saga deals with New Order and the Happy Mondays. The characters of Paul and Sean Ryder are introduced, but the glory is when New Order shows up for the first time with that name, and you get to hear a mellow, bare bones rendition of “Blue Monday”, which will never make you listen to the original the same way again.

The second half though is primarily dominated by the Happy Mondays. We meet Bez, the band’s unofficial mascot who is introduced as a chemist with a love for ecstasy. Throughout this portion of the film, the band is constantly portrayed as a group of fuck-ups, who are somehow geniuses. What else would one expect from a band who Wilson signed, simply because they came in last at the Hacienda’s Battle of the Bands? Well, he was convinced Ryder was the best poet since Yeats. However, to everyone’s dismay, the Mondays were all about partying… and it shows. The tour montage is set to “Kinky Afro” and “Wrote for Luck” (both songs are not on the actual soundtrack, however), which depicts how fucked up things really became, between the girls, the cocaine, and the parties – all while the music got lost. Tony even warns them that, “cocaine is a destroyer of talent.”

The film ends when everybody goes broke. The club doesn’t make any money due to an ecstasy ring, and the Happy Mondays don’t make any money because they cut a record while getting hooked on smoking crack. You are brought closure though with one of the most nostalgic and fantastic montages ever. On the final night of the Hacienda, Wilson throws the biggest party of the year. The Happy Mondays’ “Hallelujah (Club Mix)” blasts over the speakers as Wilson and his cohorts congratulate one another on a good and successful run. It’s then that Wilson gives an emotional monologue revolving around his excessive civic pride.

When the party ends, Wilson retreats to the roof for a spliff of “top gear” where he sees God. God tells him that he did the right thing with music (“It’s a pity you didn’t sign the Smiths”), all while appearing to look just like Wilson himself. He returns to his friends on the roof and tells them he sees God, and they sort of laugh it off with a remark about the quality of their weed. The film ends, Joy Division’s “Love Will Tear Us Apart” plays, and everything ends exactly like it should with a group like Factory… in shambles.

24 Hour Party People is by far one of the most bizarre impressionistic works within modern film. It’s a sort of hyper-reality, pseudo-documentary that’s retrospective, while breaking the fourth wall constantly. It’s raw, it’s gritty, and it’s Factory to a tee. People from the actual story even act within the film to get across how down-to-Earth Factory really was, and how accurate the movie is. The music these people made, at the time they made it, helped spawn a movement that changed music forever. And even though only a few people were involved during the time it was all going on, that movement is still mimicked and played in stereos today. The soundtrack proves that by putting on loads of Madchester classics, some punk classics from the Clash and Sex Pistols, as well as some of the earliest techno bliss. That’s what makes this movie so historically fantastic; you get a first and up-close glimpse of a movement that was about as exclusive as the parties at the Hacienda, complete with the music that made it all possible.