Dusting Em Off: R.E.M.  Fables of the Reconstruction 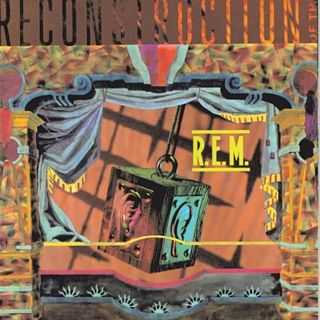 Imagine a house with an attic. It doesn’t matter if you live there, and maybe it’s better if you don’t. You pull down the chipped ladder from the roof and climb up the stairs. You’re alone. The attic is dark, with worn-down blankets, rocking chairs, old dressers, toys from someone’s childhood gone by. The attic roof is high enough off the ground where you don’t have to crawl, but you have to walk in a bit of a crouched-down position. Sit down. Light a candle. Sit in silence.

That’s the feeling this listener discovers whilst listening to R.E.M.’s Fables of the Reconstruction. It’s a darker album, but not necessarily in tone. It comes across as though songs were recorded in near dark, with only that one candle in your imagination to keep everyone together in the studio. There are lighter moments to be found, but they come and go as quickly as headlights driving past you in the dead of night, keeping you alert. Things can go wrong in the dark, and Fables has flaws. However, both beauty and passion can be found in R.E.M.’s third record, as well.

The recording of Fables was much different for the band in comparison to their first two records. “The songs on both Murmur and Reckoning had been performed for months if not years by the time they were committed to tape,” says guitarist Peter Buck. “I remember feeling dangerously unprepared when we flew to London.” Maybe that’s why there’s such a loose feeling permeating throughout the album. The first track, “Feeling Gravity’s Pull”, seems to indicate frenetic, kinetic recording sessions. The strange guitar at the opening, accompanied by the surreal frame-by-frame dance that is the video, indicates a change in direction for the Athens foursome.

Michael Stipe sings through clenched teeth while drummer Bill Berry and bassist Mike Mills contribute to the immaculate rhythm section. The light peeks in for the chorus as the familiar harmonies kick in, but only for a moment before Buck re-enters the picture and pulls the shades down with the eerie lead guitar. “Feeling Gravity’s Pull” is nothing like the fast, upbeat openers of past albums, but delivers equal impact.

“Maps and Legends” is a legend itself. The mood still drifts through the southern Gothic, but not as gloomy as its predecessor. The familiar call-and-response chorus between Michael Stipe and Mills/Berry is welcomed. It’s a far cry stylistically from a later track on Fables, “Green Grow the Rushes”, which is as jangle-pop as R.E.M. gets. The song works here, particularly Buck’s guitar building up to its climax.

The best song (arguably) is “Driver 8”. This is R.E.M. at peak form. Everything works here. You can hear Stipe becoming more comfortable in his role as front man, more confident in his lyrics. Its immediate fast pace throws the listener for the loop after the slow-to-mid-tempo of the opening two tracks. “Driver 8” gets into your head, stays there, but never irritates. Sadly, this can’t be the case for every “pop song” on Fables.

When you hear “Can’t Get There from Here”, you might think it’s the awkward production that kills the song. Producer Joe Boyd’s work here does seem to compress everything to the same volume, stifling any dynamics between the voice and music. The same can be said for “Auctioneer (Another Engine)”, which has actually gained some momentum lately during live performances, but remains a by-the-numbers bore on the record to this reviewer.

The other tracks on Fables manage to make amends for these missteps. “Old Man Kensey” is the dark cousin to “Good Advices”. The former plays out as a strange tale of the man in question, while the latter offers, well, good advice over a lifting Buck guitar. The R.E.M. guitarist also rises up in the opening to “Life and How to Live It”, where his quiet intro erupts into something hard-hitting for the rest of the track. Stipe’s lyrics alternate between blurry and clear, while Berry and Mills prove invaluable with their contributions to the rhythm section.

“Kohoutek” (not the Journey song) shines. It’s classic Stipe. Rarely would he be so impenetrable lyrically. He’s certainly singing words, but what words they are remains a mystery to me. The track hearkens back to a time where Stipe’s voice was merely another instrument amongst the guitar, bass, and drums. Someone who also seems to follow this strategy would be Jonsi’s vocal contributions to Sigur Rós.

Album closer “Wendell Gee” is a lullaby of loss, and ultimately, picking up and moving on. The banjo makes a welcome presence, and listening to it as the album reaches its conclusion, you can almost see that sun peeking through the attic window. The music ceases though the record spins in your mind. You see, R.E.M. has made better records before and since Fables of the Reconstruction, but they have also made far worse (ahem, Around the Sun, ahem). I’d even put it ahead of the much-lauded Document. It marked a turning point for the Athens gentlemen and foreshadowed the great work to come.