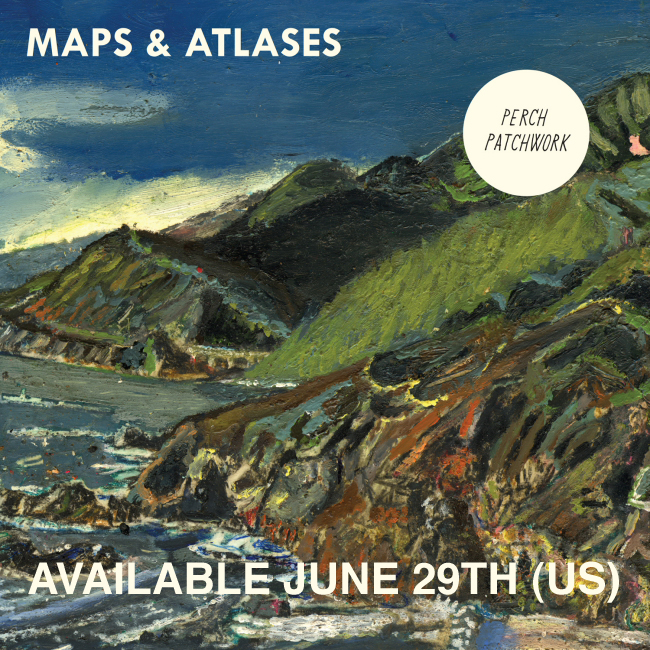 The Chicago-bred boys of Maps & Atlases are throwing their hats into the ring this summer with their newly released debut LP Perch Patchwork, a headlining cross-continental tour, and an international feel — the band has signed to FatCat records, which will release the album in the U.K. and Europe September 27th. Those are some big Chucks to fill, but those who’ve seen them live can attest to their musical prowess, as this writer did when they opened for Frightened Rabbit earlier in the year. But top billing can be a challenge for any young band.

“We’re going to make it more of a show,” guitarist Erin Elders told CoS in a recent interview. “I’ve always been a fan of bands that stagger their sets with new and exciting songs and old favorites.” With three EPs under their belt, Maps & Atlases have plenty of material to draw on, as well as twelve new tracks off of Perch Patchwork. “A lot of the songs flow in and out of each other so we’re going to figure out how to perform that and also play old songs that people want to hear, and do it in a way that makes sense.”

Normally, hearing a band member say they’ve got to “figure out how to perform” a song would raise a red flag, but one listen to Maps & Atlases and you’ll sympathize. On their EPs, time signatures fluctuate, guitar lines rarely stick to the standard blues scales, melodies are often rooted in dense jazz chord structures, and the drums’ intricacies make one question how many drummers there actually are. But Perch Patchwork will be a departure from the progressive style of their previous EPs. Sort of. “The songs are a little more focused than before, but are also the some of the craziest songs we’ve tried to do.”

Jason Cupp (producer with Nurses and Finch, among others) was brought on to produce and record the album, and the band found his engineering a much needed addition to their sound. “Working with Jason, just having someone guide us to step out of our own heads and really shape these interesting sounds, we’ve never had that before. I feel like, in a weird way, Jason was able to let us go further out there. Production-wise, he was way more fringy than we expected, but he was also really helpful in the editing of the songs. We went out there on our ideas, and then together were able to edit them down and make sense.”

Right now, you can stream the entire album on the band’s Myspace page

Perch Patchwork is available in the US starting today (Sept. 27th in UK & Europe), and the band kicks off their tour proper July 6th in St. Louis, Missouri with support throughout between The Globs and Cults. The boys then travel to Europe in October. As always, tickets can be purchased at Ticketmaster.com

Previous Story
Roger Daltrey speaks on future of The Who
Next Story
Check Out: The Thermals – "I Don't Believe You"
Popular
More Stories
[fu-upload-form form_layout="media" title="Submit Your Photo"][input type="hidden" name="ugc" value="1"][/fu-upload-form]