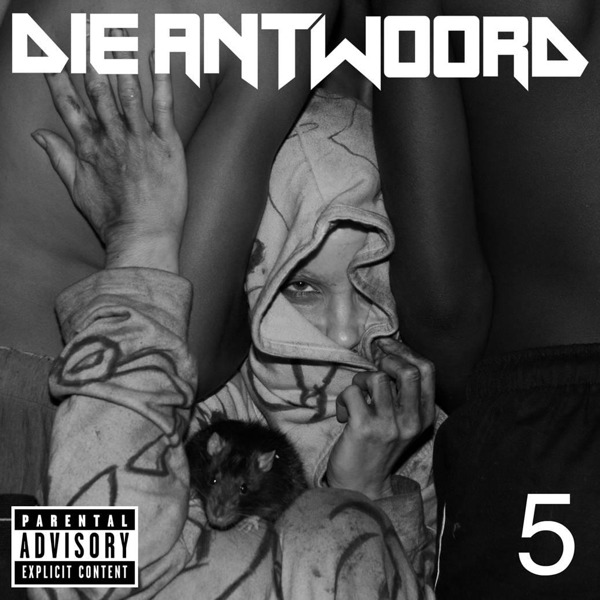 I’ll be the first to admit, when I first saw Die Antwoord’s viral video “Enter The Ninja”, I thought we were dealing with a crazy band of South African Juggalos. My mental allegation has yet to be confirmed or denied, but one thing’s for sure: these (possible) juggalos can spit legit. “Enter The Ninja” grew on me, as did every other demo I could get my hands on at the time.

The Cape Town rap group’s credibility only grew upon their debut appearance upon U.S. soil at Coachella (which I was lucky enough to witness). They went long over their allotted 25 minute set, but no one seemed to mind. The viral video seemed to have spread, as they often tend to do, and people came to witness the internet sensation in the flesh. In my mind, this was a massive turning point for Die Antwoord. The crowd didn’t just stick around for “Enter The Ninja”, they stared in awe at the unbelievable swagger and confidence at the group. One thing was made manifest that night: Die Antwoord were for real.

The group emits a very unique blend of angry hip hop with a touch of rave, all bathed in Cape Town grime. For those unfamiliar with the group, first, you need to be more viral video savvy; and second, Die Antwoord is very hard to understand. From what I can tell, head emcee Ninja has been rapping for quite some time, and has been teaching his female counterpart, Yo-Landi Vi$$er to rap and act as the hype-man (or woman) for the group. Their childhood friend DJ Hi-Tek (not to be confused with Talib Kweli’s  Reflection Eternal mate DJ Hi-Tek) provides the beats for the two young rappers. They rap primarily in English, but they incorporate a lot of Afrikaans, especially slang Afrikaner terms.

The culture shock is a bit hard to stomach at first, but after some perseverance and careful study, Die Antwoord begins to grow on you like a cancer. And that’s not just one writer’s opinion. The group signed to Interscope Records, home to such alumni as Eminem, Dr. Dre, Snoop Dogg, Tupac Shakur, and M.I.A.

Their first release for Interscope is this EP, 5, acts as a teaser for what the group is capable of. Included on the EP is their viral hit “Enter The Ninja”, which introduces the hardcore slum-rap that they so often produce. Razor sharp beats, an obnoxiously catchy hook, and a flow as smooth as finished marble make this song something that will haunt your thoughts for days. And for those who can’t get enough of the song, the five track EP includes a remix of “Ninja” that adds some flying arpeggios and club bass that makes the track exponentially more danceable.

After the opening track drops, things become more and more eclectic as the seconds slip by. The second track “Wat Kyk Jy” shows that same gritty, rage-infested rap, but also showcases an ability to spit in a lazy, Snoop Dogg style. The next track, “I Don’t Need You” is the furthest deviation from their signature Cape Town grit, but it’s every bit as infectious. Less rapping, more thematic Ninja singing over a rave friendly beat.

Arguably the best track on the EP, “Fishpaste” takes their Die Antwoord style to the next level. Unstoppable flow from Ninja, a taunting yet catchy chorus compliments of Vi$$er, and the group’s most thematic material make for a highly listenable track with an incredible amount of staying power.

In the end, this is a fantastic prelude to a debut; the perfect thing to get you primed for their upcoming debut, $O$. It’s odd and eclectic, sometimes to the point of being abrasive, but in the end, that’s what makes them so endearing. Die Antwoord’s allure comes from their mystery as well as a heavy arsenal of talent and ambition. The beats are sharp and intelligent, the raps are infectious and reminiscent of early Slim Shady, and the overall style is so enticingly strange that it ends up reminding us why we fell in love with the genre in the first place. It’s a creative take on rap in a world increasingly ruled by the formulaic Drake’s and Kid Cudi’s, 5 is a breath of fresh air and the perfect introduction to the South Africans, Die Antwoord.