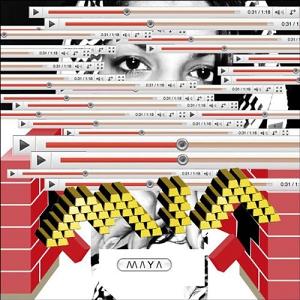 I feel as if I’m breaking up with my girlfriend of three years (hint: This means bad news is coming, take cover).

Allow me to start by saying that when a friend first threw Kala into the CD player in late-ish 2007, I literally shat a brick, for lack of a better way to put it. I had never heard of this woman who called herself “M-I-A.” Not only this, but never before had such indigenous, fetching beats and rhythms, combined with the most easily recognizable chorus’, crossed the sphere of my audio proximity.

So when the thumping bass beat of “Bamboo Banga” struck my senses (a friend’s subwoofer assisted in stimulation), it was almost exactly analogous to Garfield getting a whiff of lasagna. This music… it was so tribal, so ancient, but yet so new it felt so right! This feeling of enlightenment continued onward, through “Bird Flu”, with its earth shattering use of the Indian urumee drum, skipping forward a bit, to the Sri-Lankan horn-hooked rap ballad “World Town”, right down to the now world-renowned “Paper Planes”, to the Timbaland featured “Come Around”. Do you get my point, dear reader? Kala had me gasping for air, but coming back for more with every two-second gap between pieces. Rolling Stone called it the best album of 2007, ahead of Arcade Fire, LCD Soundsystem, Jay-Z, and even Radiohead, rightfully proclaiming it as, “the most global album of the year,” and writing that, “if she doesn’t have the whole world in her hands, at least she’s got it on her CD.” Hell, we here at CoS may not be buddy-buddy with our homies over at Pitchfork, but even they gave it a justifiable rating of 8.9. Add to the fact that “Paper Planes” was used in the trailer for Pineapple Express, which served to launch Miss (or, soon to be Mrs.) Arulpragasm into the music whirlpool, and soon after she exploded into clubs everywhere – though, appropriately so. Catch my drift?

That was three years ago. Let’s be brief: M.I.A. toured relentlessly in support of Kala, including spots at Lollapalooza, Coachella, and a famous Bonnaroo set in which she proclaimed her [at this point, obviously false] retirement; still not quite sure why she felt it necessary to pull a Hova… and now, I’m not so sure she shouldn’t have made good on her decree. Afterward, she disappeared from the public radar for a bit. She received a fair amount of unfortunate press about her supposed terrorist connections through her father, and then there was some murmurings about her marriage to pretty boy Ben Bronfman, who is an heir to the Seagrams liquor family, and also son of the CEO of Warner Brothers Music. Fast forward to a few months ago, and there was a tumultuous scandal between the hot-mama Sri Lankan rapper and New York Times writer Lynn Hirschberg; making a long story short, Hirscheberg published a less-than-complimentary appraisal of M.I.A.’s lifestyle in comparison to what she speaks out about (she called her fake). The scandal received so much publicity via the blogosphere that it has since been referred to as “TruffleGate”. So where does that bring us, folks?

At the beginning of this writing, I was feeling sorry for what I was going to say, without knowing how I would say it. After serious thinking, I find no need for apology. When I first saw that airplane(not blimp!) flying over Coachella three months ago, announcing M.I.A.’s new album, “// / Y /,” out June 29th, with performances to occur at some thing called HARD Fest, I literally jumped up and down screaming at all those around me to look up and see the amazing news. Unfortunately, had I known the content of the forthcoming release, I would have attempted to obtain a bazooka.

I have to believe that this album was just a bad consortium of mishaps. A friend once said, “M.I.A. is controversial, just to be controversial.” My thought: “BLASPHEMY!” But slowly, over time, this statement’s truthfulness has continually arrived in the forefront of my mind. The snowball started rolling with her rants and tirades on her twitter and blog, regarding her supposed terroristic Tamil connections. Then there was that uproarious “Born Free” video; so violent and querulous that it was removed from YouTube twice within the first 24 hours of life, the 9 minute 6 second video proved to be an overstatement of confusion and mixed messages. Not too long afterwards, the now infamous Trufflegate hit the interweb; M.I.A. made no apparent attempt at being modest or bashful, with such gems as, “I don’t see how you can shut up and just enjoy success when other people who don’t have the fame or the luxury to rent security guards are suffering,” and the cinematic pinning point, “I’m tired of pop stars who say, ‘Give peace a chance.’ I’d rather say, ‘Give war a chance.’” It would seem as if M.I.A. has completely contradicted these two statements on her latest, with its attention-whoring title, // / Y /.

The album kicks off with a one-minute looming beat, followed by a concise one-stanza repetitive rap by Sugu that alliterates: “Headbone connects to the neckbone, neckbone connects to the armbone/armbone connects to the handbone / handbone connects to the internet, connected to the Google, connected to the government.” What is the Tamil going for? Obviously, she’s trying to call out the government conspiracy against her; she told The New York Times that she “found out that [her] house was being bugged, and [her] emails were being hacked into.” What? The album kicks off with a wanna-be political charger, and then randomly divulges into “Steppin’ Up”, where we see M.I.A. spit fast paced raps about how great she is or how good her beats are (even though this beat wasn’t M.I.A., it was Rusko): “You know who I am/I run this fuckin’ club/dub-a-dub-a-dub-a-dub, club-a-club-a-love.” She continues in the next verse, “Basslines and ass, anything fast/humpin’ on my leg/Yo, I’m the fuckin’ best/make your money last.” What was that about being modest about your success when others can’t afford to eat? Why would you have a typical rap song, on what is supposed to be a bureaucratic blame album?

The trend continues. Toward the end, we find M.I.A. using her former main-squeeze, electro dance house DJ/Producer, Diplo, to try to recreate the success of their last outing (“Paper Planes”) with easily the most pop song on the record, “Tell Me Why”. The song features a crooning AutoTuned M.I.A. vocal, that bellows things like, “You can make a killing/but don’t forget the feeling/ people stealing money and down with double dealing.” It’s easy to play the blame game for this one; I hate to return to that damn NY Times article, but the answers are there, and in regards to this turd of an LP, it tells all.

M.I.A. had her new hubby-to-be(the aforementioned Ben Bronfman) buy a house in Los Angeles, which, after departing New York, they moved into, for purposes of raising their new son, Ikhyd. After his birth, M.I.A. began working on the record in their new habitat, and slowly but surely, they procured a wholesome crew of producers such as Blaqstarr, Rusko, and some of her singers. But the Mad Decent CEO wasn’t allowed into the club; Bronfman denied him entry. So in order for M.I.A. to work with her pop-boy toy, they rented out Red Bull Studios in Santa Monica to record “Tell Me Why”. Diplo told the NYT, “It was my birthday; I was on mushrooms, it was a special atmosphere[…] even if [M.I.A.] hates my guts, she knows that we can do crazy stuff together.” I’m sure it was a special atmosphere for you, Diplo, but unfortunately the drug-induced euphoria you experienced didn’t translate to us straight-edges. It’s very unfortunate, because this album is quite the opposite of crazy; it’s so bad that the few one-off songs you might call crazy, are composed of such noise and disarray that they quickly become impossible to listen to.

In speaking to friends about this album, several points were made, the most significant of which was that M.I.A. released Kala, and has thrived (quite literally) off of its success for the past three years. She has ridden the coat tails of “Paper Planes” for quite some time. Now, when the time comes to reproduce, she has become the attention whore Lynn Hirschberg made her out to be. With provocative but overall senseless lyrics, a horrible undertone of feigned political vilification, and a straight up fucking dumb title, this album is truly an error, a blooper that needs to be edited out. You know, the friends also said, “You know, maybe people will listen to it, just because [she’s M.I.A.].” This is the most fortunate and unfortunate truth.