Refused – The Shape of Punk to Come [Deluxe Edition] 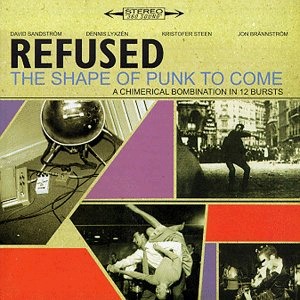 As the late-90’s saw the sludge of grunge displaced by the saccharine sheen of pop punk on an incredibly lucrative scale, the Swedish hardcore band Refused defied this “counter-cultural” capitalism by writing one of the most satisfyingly brutal works of all-time: The Shape of Punk to Come. Far from a simple reaction to punk’s new accessibility – the band was equally ferocious on its earlier full-lengths and EPs – the record was a document of bleeding heart intention, a statement that reinforced the band’s leftist political stances while redefining conceptions of how anti-establishment music was supposed to sound. Liberal on multiple planes, Shape is a collage of jazz, electronica, big-band and folk all kneaded into Refused’s time-signature tripping hardcore, a record that aesthetically challenged its offspring to advocate change within the “immoral” free market despite singer Dennis Lyxzén’s calls for the total demise of capitalism.

If you’ve never heard Refused, this dynamic might strike you as self-defeating. And, if you consider that the band’s musical and theoretical call to arms remains unfulfilled 12 years removed, or that the foursome developed such personal and intellectual animosities for one another that they disbanded the same month Shape was released, the conclusion would be hardly inaccurate. Oh, and nevermind the fact that Refused’s willingness to license their music to major American networks or reissue this very record multiple times reveals sizable cracks in an otherwise utopian, socialist facade. No, it is precisely this bold fragility that continues to endear fans to this now-cult record: We might not mean every word when we sing (scream) along, but there’s no doubt that we experience a catharsis of purely idealistic magnitude when Shape obliterates our speakers with chaotic intelligence.

Take for instance “Liberation Frequency”, “The Refused Party Program”, or the band’s most-recognizable song, “New Noise,” each of which contain lines of vitriolic disdain for Invisible Hand economics that are influenced at least indirectly by Karl Marx and other more anarchistic thinkers. No matter your politics, Lyxzén’s underlying philosophy in these songs would be considered extreme everywhere except the most left-leaning coffee haunts of the urban Western Hemisphere. But, what difference does it make when the singer collides with drummer David SandstrÃ¶m, bass/guitarist Kristofer Steen, and guitarist/sampler whiz Jon BrÃ¤nnstrÃ¶m in such a malevolent and beautiful manner? Do we all have to vote Democrat because we love Springsteen’s blue-collar anthems, too? The question is, of course, ridiculous, though it isn’t meant to suggest Refused’s political furor shouldn’t hold meaning. Hardly, it’s just that in retrospect, the band’s true impact – the “shape” in The Shape of Punk to Come – is ultimately more ephemeral than political, though no less moving.

As with all truly memorable records, The Shape of Punk to Come decimated convention without over-embracing novelty, paving new paths by cultivating an anti-establishment vision that must’ve required an unnatural patience to execute. Its asymmetrical breakdowns, throbbing rhythmic interplay, vintage samples, enveloping production and talk/scream vocals have predictably influenced countless derivative works, though bands like Poison the Well, Glassjaw, Underoath and Relationship of Command-era At the Drive-In reverently allowed Shape to inspire without influencing too heavily. Refused themselves were able to redirect their angst with good results through The (International) Noise Conspiracy, TEXT and, more recently, AC4, though their 1998 masterpiece created a myth of the band impossible to eclipse, as its aftermath has revealed. In the short term, with each member working diligently to promote his new endeavors, this shadow might be troubling, though in hindsight Shape‘s resilience will hopefully outweigh any frustration Lyxzén and Co. have experienced on this account.

The story and sound of Shape is even more poignant when you consider that Refused matured during the politically placid days of the Clinton administration, which inspires one to wonder how much more unrelenting the four-piece would’ve been had Shape been written a decade later. But, if Lyxzén, SandstrÃ¶m, Steen and BrÃ¤nnstrÃ¶m still harbor the musical thesis that guided the record from the beginning, they’d be the first to cut our wanderlust short. Afterall, as Fugazi affirmed even before Refused came together in UmeÃ¥, aggressive music is just one of the many tools available to promote an authentic punk ethos.