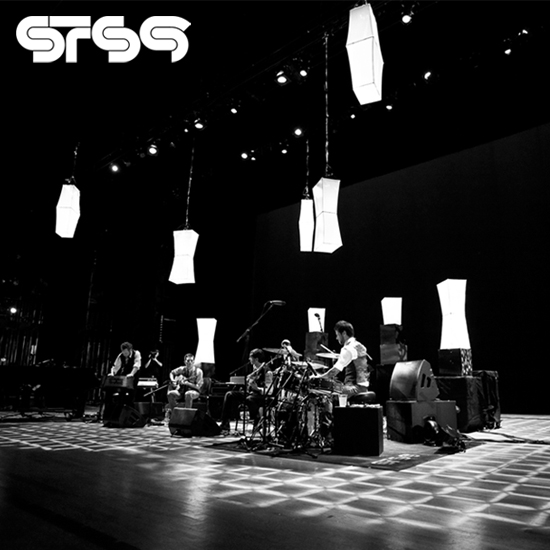 When STS9 first came up with the Axe the Cables idea, there was a joke going around amongst fans and fan message boards, something along the lines of “What’s STS9 acoustic sound like? Them playing type writers?” The joke is unfair and ill informed. But it’s this type of fan sentiment and disenchantment – murmurings of whether or not they’d forgotten how to play their instruments, utilizing laptops and effects as a crutch – that lead the band to take over an exquisite modern opera house on December 29, 2009 in Denver, CO.

And STS9 played like they had something to prove. In their storied 10+ years as a band, STS9 has been in a state of constant evolution. Continual change and development is and always has been at the heart of their nature.

Their early days saw them as jazzy-psych warriors bent on Mayan time calendars and the power of crystals. They brought soul and groove to the stage through tight improvisation and noticeable chemistry; every song was subject to inversion, warping, and manipulation on the spot. In 2005, they put out Artifact, arguably one of the most concise and finely orchestrated pieces of electronic music from the 2000’s. They spent countless hours in the studio laying tracks and overdubs, tweaking the most minuscule of sounds with tender loving care and extra attention to detail.

They moved further into the realm of composition, abandoning the three-hour improv sessions that originally brought them notoriety. Peaceblaster came out in 2008 with mixed reception from fans. The spacey feel-good music of the past was traded in for serious and aggressive politically charged themes. Last year’s Ad Explorata followed in a similar vein: ever-improving musicianship with added spices of funk and hip-hop, loud bass lines, and even louder waves of psychedelic progression. The stage became littered with laptops, and purists began to wonder if the new STS9 was trading its organic ethos for a more shallow, digitized approach.

Axe the Cables puts this discussion to rest. STS9 have been, are, and always will be musicians, first and foremost. Other then the occasional flubbed arpeggio or muddled guitar note, the performance is nearly flawless.

The music translates wonderfully into an acoustic setting. It should be noted that this is music for people that love music, and lots of it. The collection is nearly two hours long, and the average song runs roughly six minutes. If you have a short attention span or prefer catchy, hook-laden verse-chorus music, this record probably isn’t for you. This is rich, luscious, and technical music for the type of people that enjoy dancing ‘til the sun comes up, the type of people who abandon day jobs and family life to follow music on the road, searching for that otherworldly sweet spot where nothing matters or exists but them and the music.

The setlist contains plenty of classics (“Kamuy”, “Equinox”, “Moonsocket”) mixed with plenty of recent numbers (“New Soma”, “The Fog”, “Re_Stereo). The absence of laptops and electronics doesn’t detract from the music and really doesn’t detract from the free-for-all, party vibe of the show either – you can hear fans yelling loudly throughout the recording or watch them dancing as if nothing’s changed on YouTube videos.

Instead, the music sounds classy, really classy. You can hear more of the world-music influence, better appreciate the classical-style composition style, and really get down to what STS9 music is all about: the rhythm section. David Murphy (a.k.a. Murph) really is the leader of this band. His bass lines, albeit electronic, guides the band through the sweeping changes and orchestrated movements. Jeffree Lerner’s percussion work is given greater clarity in the acoustic environment; his xylophone touches and waterfall-like chimes add an interesting technical element to the performance. And of course, Zach Velmer has always been one of the best in the business, though his drumming on Axe the Cables is a tad more subdued then his vicious attack style maneuvering of their standard performance – but it’s fitting and necessary for this type of show.

The highlights and low points of the album will be different for every listener. STS9’s music is very open to interpretation. The absence of lyrics and the free-form style allows the listener to make their own judgments and decisions on what the music means or is about. But the opening of “New Soma” and then “The Following” is particularly grabbing, the band has a recognizable enthusiasm in tackling the first songs of their first ever acoustic performance, and the symbiotic audience-band energy is palatable. Guitarist Hunter Brown adds powerful fills with his repetitive, nimbly picked lines.

The first set closer, “Lo Swaga”, has a serious, driving quality akin to the electronic version of the song, but with clean grand piano and swathed acoustic plucking over the ever-shifting rhythm section, breathing fresh life into the tune. “Kamuy” is given an island-tinged flavor to its strong treadmill-like structure, revealing the technical beauty of the standard.

“Equinox” and “Moonsocket” are two standouts from the second set. The former is slowed down into a mysterious, James Bond-style theme, transforming into a spaced out, melancholy interlude before compounding into a wash of revolving, intertwined piano/guitar sighs. “Moonsocket” starts out in a similar manner, but instead of aiming for the ethereal bliss of “Equinox,” it patiently develops into a powerful peaking crescendo of pure musical candy. A twelve-minute take on “Breathe In” ends the set with grace and authority.

As any band grows and evolves, particularly in the context of the jam-band world, there are going to be ups and downs, good years and not-so-good years, transcendental shows mixed with sloppy performances. But what Axe the Cables does for STS9 is that it reconfirms them as one of the most technically proficient and exciting bands on the scene. The band, along with its closely knit fanbase, should be proud of such an accomplishment, and relish in the uniting and rebirthing qualities of such a masterful performance. Well stated, STS9, well stated.