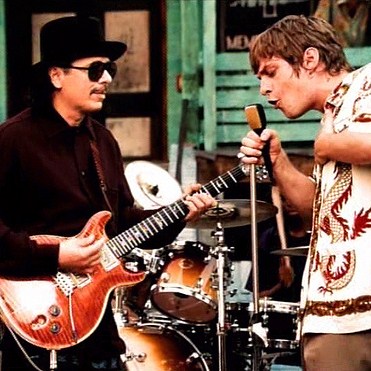 Generally speaking, Carlos Santana can do whatever he wants. He’s earned it. But that doesn’t mean he should.

His latest move, as we told you last month, is to record an album of classic guitar rock covers. Sounds harmless until you get a load of the guest vocalists.

Other potential crimes against music include Jacoby Shaddix of Papa Roach doing “Smoke on the Water”, Chester Bennington and Doors keyboardist Ray Manzarek on “Riders on the Storm” (hard to believe Manzarek was sober when he agreed to this), and Nas joining the effort for a cover of AC/DC’s “Back in Black” (WTF?).

However, there are a few intriguing selections. Chris Cornell has been tapped for Led Zeppelin’s “Whole Lotta Love”, and india.arie and Yo-Yo Ma are unlikely to butcher “While My Guitar Gently Weeps” — in fact, Olivia Harrison told Carlos Santana, “Listening to the song, it made me jump for joy and cry at the same time.” And hey, good things happen when Rob Thomas and Santana work together, so “Sunshine of Your Love” has potential.

It’s nothing to get worked up over — just a guy playing some songs with some expensive friends (or at least some names nabbed from a 2007 Top 40 chart). But this concept could’ve been handled brilliantly. How about Gogol Bordello’s Eugene HÃ¼tz doing “Free Bird”? Is there anyone in the world who wouldn’t buy the album on the strength of that track alone?

The tracklist is still in its working stage, so there’s still hope. The album, co-produced by longtime Santana collaborator Clive Davis, is called Guitar Heaven: The Greatest Guitar Classics of All Time and comes out September 21st on Arista Records.