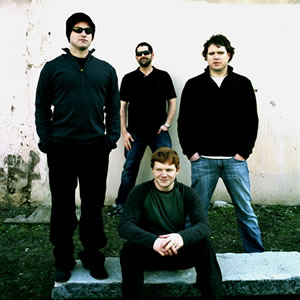 Having already completed a massive 5-month US tour, with stops at many of the nation’s summer festivals — Ultra, Wakarusa, Bonnaroo, Starscape — the Disco Biscuits have taken some time off for a relaxing summer vacation. Approximately enough time to finalize their own festival and plan an itinerary for their summer-ending road trip.

After headlining all three nights of Camp Bisco next weekend (July 15-17), the foursome will take a month off to rest and prepare for a 15-date Eastern US tour. Following two one-off festival appearances, the tour officially kicks off with a beach party in Dewey Beach, Delaware, and continues with highly anticipated co-headlining dates.

They will arrive in Florida August 28th for their debut Black Water Music Festival set before heading back north to Georgia to kick-off an amazing weekend with jam-brethren STS9. And unlike the rest of the nation, the Disco Biscuits have decided to work through the Labor Day weekend. Beginning with a late-night Friday set at Chi-Town’s Congress Theater, they will then travel to Austin’s Nocturnal Festival for a Saturday night performance, only to return to the Windy City for a headlining appearance at North Coast Music Festival. The tour will wind down through mid-September with performances at State College, Buffalo, Holyoke, and Boston. Dubstep producer MiMOSA will perform opening duties for many of the dates, but expect special guest performances to be announced as the end of summer nears. Something to stay hopeful for as the festival season ends and the long summer days continue to shorten.

But wait, there’s more … much more! Something extremely appetizing will surely be created when the Biscuits join forces with The String Cheese Incident October 29th at the Hampton Coliseum. Tickets to all the summer dates, excluding the Boston and Hampton shows, are currently available at Bisco Tix. Tickets to the Boston show are available here, and Hampton’s tickets will go on sale at Ticketmaster July 18, and probably be sold out later that day. Complete tour dates below.

Oh, and we’d be remiss not to note our interview with the band, which we posted today.