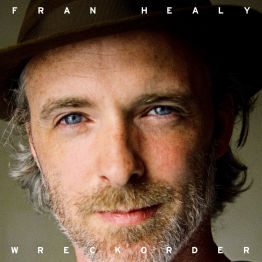 Travis hasn’t released an album since 2008’s Ode to J. Smith, so frontman Fran Healy has announced that he’s going it alone…f or now. The 37-year-old Scotsman will release his first solo album, Wreckorder, on October 5th (via Rykodisc) and is currently touring the North American continent opening for Keane. While he’s merely taking a break from his band, Frealy has admitted feeling pleasantly apprehensive about branching out on his own.

The California Chronicle reports he blogged that “It was so good to be onstage again, but it’s strange without Travis,” adding that “I feel very naked, but I kind of like the scary feeling.” Travis first debuted in 1997 but hit it big with their 1999 sophomore release, The Man Who. They’ve since released five albums, building a loyal fanbase along the way. Still, the band never achieved the same level of success they had with their single, “Why Does It Always Rain On Me?”, which barely cracked Billboard’s Adult Top 40 a decade ago.

Wreckorder looks to change all of that. As we previously reported, Healy’s solo effort is slated to be a ten-track offering ripe with noteworthy collaborations, including a duet with Neko Case on “Sing Me To Sleep” and a cameo by the Fab Four’s most famous southpaw. While Macca won’t be lending vocals to the album, Wreckoder will be the beneficiary of some nice low-end courtesy of Sir Paul, who is slapping the bass on “As It Comes”.

The first single will be the radio-friendly tune “Buttercup”, which was inspired by what Healy described to Spin Magazine as the experience of having his girlfriend turn her nose up at the buttercups he picked as a gift in lieu of roses. “I couldn’t afford fancy roses and thought [the buttercups] would be even better and more romantic,” said Healy, “she didn’t think so.”

We’re not sure what Ali G would say about the single (or Healy’s dating tactics), but you can check out the exclusive stream on Spin.com and catch Healy on one of the dates below. Select tickets for solo and supporting dates are available on Ticketmaster.com.