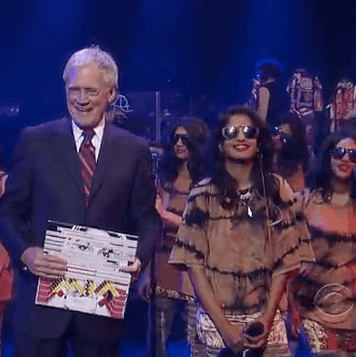 There are moments that cause you to text any and everyone you can think of at 12:30 in the morning. M.I.A.‘s performance of “Born Free” on Letterman last night was one of them.

But then I realized something interesting was happening when the first shot of the dozen M.I.A.’s registered in my brain. It turns out my expectations were a bit off, so much so in fact, that by the time it was all said and done, I can actually say M.I.A.’s performance may end up being my favorite one-song TV recording of the year.

— Seriously, are you surprised to find out that the backing music on // / Y / was made by a blind guy (Edit: Martin Rev from Suicide) playing with his elbows?

— Most necessary backing track ever. There are 12 people out there and apparently not one of them can sing in time, M.I.A. included.

— She likes posing. It’s really hard to take someone’s outspoken political agenda seriously when they like making pucker lips and peace signs as much as she does. At least John Lennon didn’t do the lip thing.

— This song is shitty.

— Also, how about the most half-assed choreography of all time? I think they recruited studio audience members for this and tried to create a dance during the Kristin Chenoweth interview. The Situation would be proud.